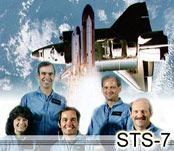 Sally Ride became the first American woman to fly in space. Two communications satellites were deployed, ANIK C-2 for TELESAT Canada and PALAPA-B1 for Indonesia, both were attached to the Payload Assist Module-D (PAM-D) motors. Seven Get Away Special canisters in the cargo bay held a variety of experiments, including one studying affects of space on social behavior of an ant colony in zero gravity. Ten experiments were mounted on the Shuttle Pallet Satellite (SPAS-01) and performed research in forming metal alloys in microgravity and the use of a remote sensing scanner. The orbiter's small control rockets were fired while SPAS-01 was held by the remote manipulator system to test the movement on an extended arm. Experiment 1: To investigate space sickness was carried out. Other payloads on this mission were: Office of Space and Terrestrial Applications-2 (OSTA-2); Continuous Flow Electrophoresis System (CFES); Monodisperse Latex Reactor (MLR) and one Shuttle Student Involvement (SSIP) experiment.
--- 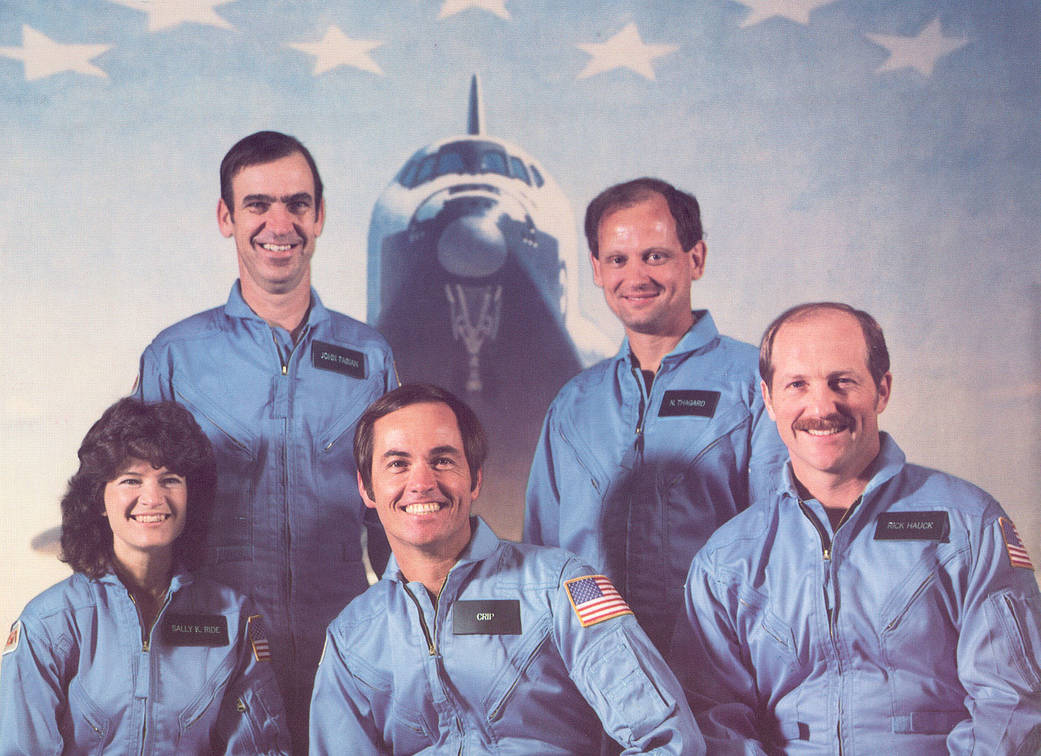 Sally Ride and her crewmates rocket into space aboard Space Shuttle Challenger at 7:33 a.m. EDT on June 18, 1983.Ride later described the launch as "exhilarating, terrifying and overwhelming all at the same time."

In this 1983 painting by Robert McCall, the launch of STS-7 from the Kennedy Space Center in Florida is depicted. This mission was the first American mission to have a female astronaut, Sally Ride. This was the seventh space shuttle mission, and was the second mission for the Space Shuttle Challenger.

STS007-02-020 (21 June 1983) --- Astronaut Sally K. Ride, STS-7 mission specialist, STS-7 mission specialist, stands in the mid deck of the orbiting Space Shuttle Challenger near one of the experiment with which she has devoted a great deal of time. The continuous flow electrophoresis system (CFES) experiment, about the size of a household refrigerator, stands nearby. One of her fellow crewmembers moves partially out of frame in the background. The tube on her face is part of a communications system linking Dr. Ride to ground controllers in Houston.

STS07-32-1702 (22 June 1983) --- The Earth-orbiting space shuttle Challenger beyond the Earth's horizon was captured by a 70mm camera onboard the unmanned, free-flying Shuttle Pallet Satellite (SPAS-01) during the busy flight day 5 of the STS-7 mission. Visible in the cargo bay are the protective cradles for the now-vacated Telesat Anik C-2 and Palapa B communications satellites, the pallet for the NASA Office of Space and Terrestrial Applications (OSTA-02), the Remote Manipulator System (RMS) and the KU-Band antenna. The STS-7 crew with the RMS later retrieved the SPAS and returned it to a stowed position in the cargo bay for return to Earth. Photo credit: NASA or National Aeronautics and Space Administration

STS007-14-629 (21 June 1983) ---- Astronaut Sally K. Ride, STS-7 mission specialist, performs a number of functions simultaneously, proving the necessity for versatility and dexterity in space travel. Floating freely on the flight deck, Dr. Ride communicates with ground controllers in Houston, moves within feet of important reference data, hand calculators and other aids all at the same time. She is one of the five astronaut crewmembers for the Challenger's second orbital mission. Her head is in the station normally occupied by the pilot (in this case, Federick H. (Rick) Hauck) and her feet are anchored at the station for the crew commander (in this case, Robert L. Crippen).

S83-35782 (18 June 1983) --- An Orbital Maneuvering System (OMS) engine firing caused this bright glow at the aft end of the Earth-orbiting space shuttle Challenger on June 18, 1983. Also visible in the 70mm exposure are parts of the Shuttle Pallet Satellite (SPAS-01). The experiment package for NASA's Office of Space and Terrestrial Applications (OSTA-2), the protective cradles for the Indonesian Palapa-B and Telesat Canada Anik C2 satellites, some getaway special (GAS) canisters and the Canadian-built Remote Manipulator System (RMS). The firing took place less than an hour after deployment of Anik. Photo credit: NASA

S83-35620 (18 June 1983) --- The space shuttle Challenger, its two solid rocket boosters and an external fuel tank carry the five-member STS-7 astronaut crew toward a six-day mission in Earth orbit. This high-angle view of the liftoff, a lengthy stretch of Florida Atlantic coastline and a number of large cumulus clouds was photographed with a handheld 70mm camera by astronaut John W. Young. Young usually pilots the Shuttle Training Aircraft (STA) for weather monitoring at launch and landing sites for STS missions. The Challenger's second launch occurred at 7:33 a.m. (EDT) on 18 June 1983. Photo credit: NASA