Five years after NASA’s MAVEN spacecraft entered into orbit around Mars, data from the mission has led to the creation of a map of electric current systems in the Martian atmosphere.

“These currents play a fundamental role in the atmospheric loss that transformed Mars from a world that could have supported life into an inhospitable desert,” said experimental physicist Robin Ramstad of the University of Colorado, Boulder. “We are now currently working on using the currents to determine the precise amount of energy that is drawn from the solar wind and powers atmospheric escape.” Ramstad is lead author of a paper on this research published May 25 in Nature Astronomy.

Earth has such current systems, too: we can even see them in the form of colorful displays of light in the night sky near the polar regions known as the aurora, or northern and southern lights. Earth's aurora are strongly linked to currents, generated by the interaction of the Earth’s magnetic field with the solar wind, that flow along vertical magnetic field lines into the atmosphere, concentrating in the polar regions. Studying the flow of electricity thousands of miles above our heads, though, only tells part of the story about the situation on Mars. The difference lies in the planets’ respective magnetic fields, because while Earth’s magnetism comes from within, Mars’ does not.

Earth’s magnetism comes from its core, where molten, electrically conducting iron flows beneath the crust. Its magnetic field is global, meaning it surrounds the entire planet. Since Mars is a rocky, terrestrial planet like Earth, one might assume that the same kind of magnetic paradigm functions there, too. However, Mars does not generate a magnetic field on its own, outside of relatively small patches of magnetized crust. Something different from what we observe on Earth must be happening on the Red Planet.

What’s going on above Mars?

The solar wind, made up largely of electrically charged electrons and protons, blows constantly from the Sun at around a million miles per hour. It flows around and interacts with the objects in our solar system. The solar wind is also magnetized and this magnetic field cannot easily penetrate the upper atmosphere of non-magnetized planets like Mars. Instead, currents that it induces in the planet’s ionosphere cause a pile-up and strengthening of the magnetic field, creating a so-called induced magnetosphere. How the solar wind powers this induced magnetosphere at Mars has not been well understood until now.

As solar wind ions and electrons smash into this stronger induced magnetic field near Mars, they are forced to flow apart due to their opposite electric charge. Some ions flow in one direction, some electrons in the other direction, forming electric currents that drape around from the dayside to the nightside of the planet. At the same time, solar x-rays and ultraviolet radiation constantly ionize some of the upper atmosphere on Mars, turning it into a combination of electrons and electrically charged ions that can conduct electricity. 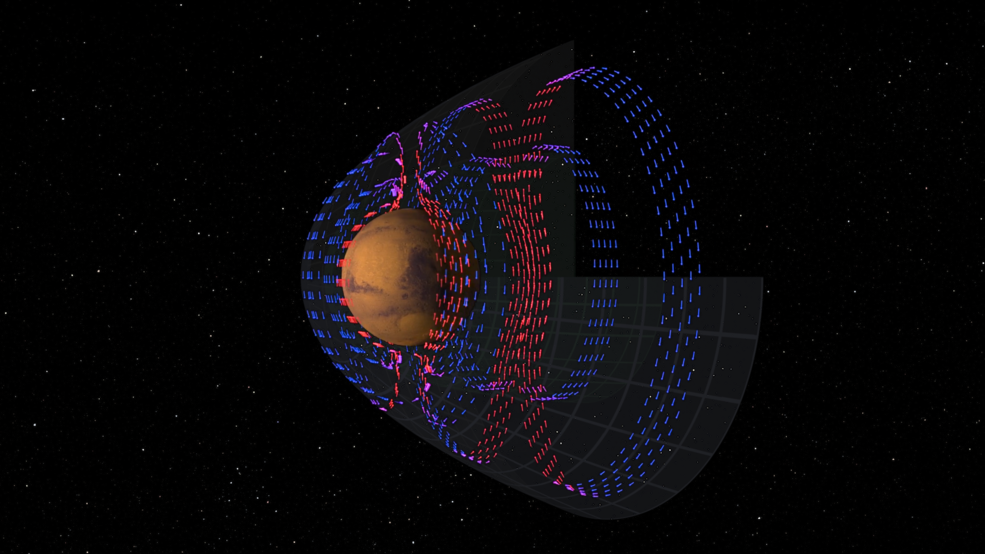 This image is from a scientific visualization of the electric currents around Mars. Electric currents (blue and red arrows) envelop Mars in a nested, double-loop structure that wraps continuously around the planet from its day side to its night side. These current loops distort the solar wind magnetic field (not pictured), which drapes around Mars to create an induced magnetosphere around the planet. In the process, the currents electrically connect Mars’ upper atmosphere and the induced magnetosphere to the solar wind, transferring electric and magnetic energy generated at the boundary of the induced magnetosphere (faint inner paraboloid) and at the solar wind bow shock (faint outer paraboloid).
Credits: NASA/Goddard/MAVEN/CU Boulder/SVS/Cindy Starr

“Mars’ atmosphere behaves a bit like a metal sphere closing an electric circuit,” Ramstad said. “The currents flow in the upper atmosphere, with the strongest current layers persisting at 120-200 kilometers (about 75-125 miles) above the planet’s surface.” Both MAVEN and previous missions have seen localized hints of these current layers before, but they have never before been able to map the complete circuit, from its generation in the solar wind, to where the electrical energy is deposited in the upper atmosphere.

“With a single elegant operation, the strength and paths of the currents pop out of this map of the magnetic field,” Ramstad said.

Without a global magnetic field surrounding Mars, the currents induced in the solar wind can form a direct electrical connection to the Martian upper atmosphere. The currents transform the energy of the solar wind into magnetic and electric fields that accelerate charged atmospheric particles into space, driving atmospheric escape to space. The new results reveal several unexpected features particular to MAVEN’s goal to understand atmospheric escape: the energy that drives escape appears to be drawn from a much larger volume than was often assumed.

Solar-wind-driven atmospheric loss has been active for billions of years and contributed to the transformation of Mars from a warm and wet planet that could have harbored life into a global cold desert. MAVEN is continuing to explore how this process works and how much of the planet’s atmosphere has been lost.

This research was funded by the MAVEN mission. MAVEN's principal investigator is based at the University of Colorado's Laboratory for Atmospheric and Space Physics, Boulder, and NASA Goddard manages the MAVEN project. NASA is exploring our Solar System and beyond, uncovering worlds, stars, and cosmic mysteries near and far with our powerful fleet of space and ground-based missions.