These Hubble Space Telescope images show the varied faces of Uranus. On the left, Uranus in 2005 displays its ring system. The planet — along with its rings and moons — is tipped on its side, rotating at roughly a 90-degree angle from the plane of its orbit. In the Hubble close-up taken just one year later, Uranus reveals its banded structure and a mysterious dark storm.
Credits: NASA, ESA, and M. Showalter (SETI Institute); Right: NASA, ESA, L. Sromovsky and P. Fry (U. Wisconsin), H. Hammel (Space Science Institute), and K. Rages (SETI Institute) 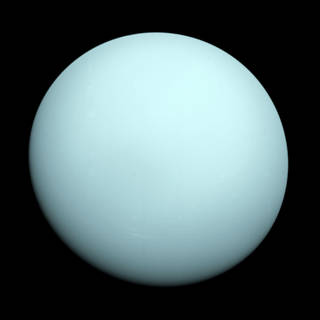 Arriving at Uranus in 1986, Voyager 2 observed a bluish orb with extremely subtle features. A haze layer hid most of the planet's clouds from view.
Credits: NASA/JPL-Caltech 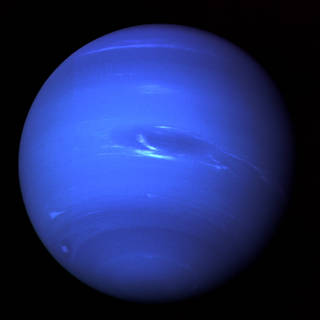 This Voyager 2 image of Neptune shows a cold and dark wind-whipped world. In 1989, NASA’s Voyager 2 became the first and only spacecraft to observe the planet Neptune, passing about 3,000 miles above the planet’s north pole.
Credits: NASA/JPL-Caltech 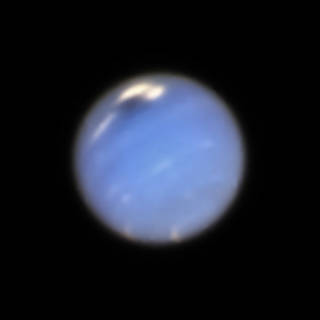 Far-flung Uranus and Neptune — the ice giants of our solar system — are as mysterious as they are distant. Soon after its launch in 2021, NASA’s James Webb Space Telescope will change that by unlocking secrets of the atmospheres of both planets.

The cold and remote giant planets Uranus and Neptune are nicknamed the “ice giants” because their interiors are compositionally different from Jupiter and Saturn, which are richer in hydrogen and helium, and are known as the “gas giants.” The ice giants are also much smaller than their gaseous cousins, being intermediate in size between terrestrial planets and the gas giants.  They represent the least-explored category of planet in our solar system.  Scientists using Webb plan to study the circulation patterns, chemistry and weather of Uranus and Neptune in a way only Webb can.

“The key thing that Webb can do that is very, very difficult to accomplish from any other facility is map their atmospheric temperature and chemical structure,” explained the studies’ leader, Leigh Fletcher, an associate professor of planetary science at the University of Leicester in the United Kingdom. “We think that the weather and climate of the ice giants are going to have a fundamentally different character compared to the gas giants. That’s partly because they’re so far away from the Sun, they’re smaller in size and rotate slower on their axes, but also because the blend of gases and the amount of atmospheric mixing is very different compared with Jupiter and Saturn.”

All the gases in the upper atmospheres of Uranus and Neptune have unique chemical fingerprints that Webb can detect. Crucially, Webb can distinguish one chemical from another.  If these chemicals are being produced by sunlight interacting with the atmosphere, or if they’re being redistributed from place to place by large-scale circulation patterns, Webb will be able to see that.

These studies will be conducted through a Guaranteed Time Observations (GTO) program of the solar system led by Heidi Hammel, a planetary scientist and Webb Interdisciplinary Scientist. She is also Vice President for Science at the Association of Universities for Research in Astronomy (AURA) in Washington, D.C. Hammel’s program will demonstrate the capabilities of Webb for observing solar system objects and exercise some of Webb’s specific techniques for objects that are bright and/or are moving in the sky.

Unlike the other planets in our solar system, Uranus — along with its rings and moons — is tipped on its side, rotating at roughly a 90-degree angle from the plane of its orbit. This makes the planet appear to roll like a ball around the Sun. That weird orientation — which may be the result of a gargantuan collision with another massive protoplanet early in the formation of the solar system — gives rise to extreme seasons on Uranus.

When NASA’s Voyager 2 spacecraft flew by Uranus in 1986, one pole was pointing directly at the Sun.  “No matter how much Uranus would spin,” Hammel explained, “one half was in complete sunlight all the time, and the other half was in total darkness. It’s the craziest thing you can imagine.”

Disappointingly, Voyager 2 saw only a billiard-ball smooth planet covered in haze, with only a scant handful of clouds. But when Hubble viewed Uranus in the early 2000s, the planet had traveled a quarter of the way around in its orbit. Now the equator was pointed at the Sun, and the entire planet was illuminated over the course of a Uranian day.

“Theory told us nothing would change,” said Hammel, “But the reality was that Uranus started sprouting up all kinds of bright clouds, and a dark spot was discovered by Hubble. The clouds seemed to be changing dramatically in response to the immediate change in sunlight as the planet traveled around the Sun.”

As the planet continues its slow orbital trek, it will point its other pole at the Sun in 2028.

Webb will give insight into the powerful seasonal forces driving the formation of its clouds and weather, and how this is changing with time. It will help determine how energy flows and is transported through the Uranian atmosphere. Scientists want to watch Uranus throughout Webb’s life, to build up a timeline of how the atmosphere responds to the extreme seasons. That will help them understand why this planet’s atmosphere seems to go through periods of intense activity punctuated by moments of calm.

Neptune: A World of Supersonic Winds

Neptune is a dark, cold world, yet it is whipped by supersonic winds that can reach up 1,500 miles per hour. More than 30 times as far from the Sun as Earth, Neptune is the only planet in our solar system not visible to the naked eye. Its existence was predicted by mathematics before its discovery in 1846. In 2011, Neptune completed its first 165-year orbit since its discovery.

Like Uranus, this ice giant’s very deep atmosphere is made of a thick soup of water, ammonia, hydrogen sulfide and methane over an unknown and inaccessible interior. The accessible upper layers of the atmosphere are made of hydrogen, helium and methane. As with Uranus, the methane gives Neptune its blue color, but some still-mysterious atmospheric chemistry makes Neptune’s blue a bit more striking than that of Uranus.

“It’s the same question here: How does energy flow and how is it transported through a planetary atmosphere?” explained Fletcher. “But in this case, unlike Uranus, the planet has a strong internal heat source. That heat source generates some of the most powerful winds and the most short-lived atmospheric vortices and cloud features of anywhere in the solar system. If we look at Neptune from night to night, its face is always shifting and changing as these clouds are stretched and pulled and manipulated by the underlying wind field.”

Following the 1989 Voyager 2 flyby of Neptune, scientists discovered a bright, hot vortex — a storm — at the planet’s south pole. Because the temperature there is higher than everywhere else in the atmosphere, this region is likely associated with some unique chemistry. Webb’s sensitivity will allow scientists to understand the unusual chemical environment within that polar vortex.

Fletcher advises to be prepared for seeing phenomena on Uranus and Neptune that are totally unlike what we’ve witnessed in the past. “Webb really has the capability to see the ice giants in a whole new light.  But to understand the continual atmospheric processes that are shaping these giant planets, you really need more than just a couple of samples,” he said. “So we compare Jupiter to Saturn to Uranus to Neptune, and by that, we build up a wider picture of how atmospheres work in general. This is the beginning of understanding how these worlds are changing with time.”

Hammel added, “We now know of hundreds of exoplanets — planets around other stars — of the size of our local ice giants. Uranus and Neptune provide us ground truth for studies of these newly discovered worlds.”

The James Webb Space Telescope will be the world’s premier space science observatory when it launches in 2021. Webb will solve mysteries in our solar system, look beyond to distant worlds around other stars, and probe the mysterious structures and origins of our universe and our place in it. Webb is an international program led by NASA with its partners, ESA (European Space Agency) and the Canadian Space Agency.