Comet Discovered to Have Its Own Northern Lights

This animation comprises 24 montages based on images acquired by the navigation camera on the European Space Agency's Rosetta spacecraft orbiting Comet 67P/Churyumov-Gerasimenko between Nov. 19 and Dec. 3, 2014.
Credits: ESA/Rosetta/NAVCAM

Data from NASA instruments aboard the ESA (European Space Agency) Rosetta mission have helped reveal that comet 67P/Churyumov-Gerasimenko has its own far-ultraviolet aurora. It is the first time such electromagnetic emissions in the far-ultraviolet have been documented on a celestial object other than a planet or moon. A paper on the findings was released today in the journal Nature Astronomy.

On Earth, aurora (also known as the northern or southern lights) are generated when electrically charged particles speeding from the Sun hit the upper atmosphere to create colorful shimmers of green, white, and red. Elsewhere in the solar system, Jupiter and some of its moons – as well as Saturn, Uranus, Neptune, and even Mars – have all exhibited their own version of northern lights. But the phenomena had yet to be documented in comets.

Rosetta is space exploration's most traveled and accomplished comet hunter. Launched in 2004, it orbited comet 67P/Churyumov-Gerasimenko (67P/C-G) from Aug. 2014 until its dramatic end-of-mission comet landing in Sept. 2016.The data for this most recent study is on what mission scientists initially interpreted as "dayglow," a process caused by photons of light interacting with the envelope of gas – known as the coma – that radiates from, and surrounds, the comet's nucleus. But new analysis of the data paints a very different picture.

"The glow surrounding 67P/C-G is one of a kind," said Marina Galand of Imperial College London and lead author of the study. "By linking data from numerous Rosetta instruments, we were able to get a better picture of what was going on. This enabled us to unambiguously identify how 67P/C-G's ultraviolet atomic emissions form." 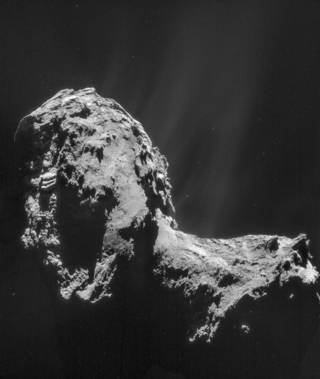 This mosaic of comet 67P/Churyumov-Gerasimenko was taken on Nov. 20, 2014. The image resolution is 10 feet (3 meters) per pixel.
Credits: ESA/Rosetta/NAVCAM
Full image and caption

The data indicate 67P/C-G's emissions are actually auroral in nature. Electrons streaming out in the solar wind – the stream of charged particles flowing out from the Sun – interact with the gas in the comet's coma, breaking apart water and other molecules. The resulting atoms give off a distinctive far-ultraviolet light. Invisible to the naked eye, far-ultraviolet has the shortest wavelengths of radiation in the ultraviolet spectrum.

Exploring the emission of 67P/C-G will enable scientists to learn how the particles in the solar wind change over time, something that is crucial for understanding space weather throughout the solar system. By providing better information on how the Sun's radiation affects the space environment they must travel through, such information could ultimately can help protect satellites and spacecraft, as well as astronauts traveling to the Moon and Mars.

"Rosetta is the gift that keeps on giving," said Paul Feldman, an investigator on Alice at the Johns Hopkins University in Baltimore and a co-author of the paper. "The treasure trove of data it returned over its two-year visit to the comet have allowed us to rewrite the book on these most exotic inhabitants of our solar system – and by all accounts there is much more to come."

NASA-supplied instruments contributed to this investigation. The Ion and Electron Sensor (IES) instrument detected the amount and energy of electrons near the spacecraft, the Alice instrument measured the ultraviolet light emitted by the aurora, and the Microwave Instrument for the Rosetta Orbiter (MIRO) measured the amount of water molecules around the comet (the MIRO instrument includes contributions from France, Germany, and Taiwan). Other instruments aboard the spacecraft used in the research were the Italian Space Agency's Visible and InfraRed Thermal Imaging Spectrometer (VIRTIS), the Langmuir Probe (LAP) provided by Sweden, and the Rosetta Orbiter Spectrometer for Ion and Neutral Analysis (ROSINA) provided by Switzerland.

Rosetta was an ESA mission with contributions from its member states and NASA. Rosetta's Philae lander, which successfully landed on the comet in November 2014, was provided by a consortium led by the German Aerospace Center in Cologne; Max Planck Institute for Solar System Research in Gottingen, Germany; the French National Space Agency in, Paris; and the Italian Space Agency in Rome. A division of Caltech, NASA's Jet Propulsion Laboratory in Southern California managed the U.S. contribution of the Rosetta mission for NASA's Science Mission Directorate in Washington. JPL also built the MIRO and hosts its principal investigator, Mark Hofstadter. The Southwest Research Institute (San Antonio and Boulder, Colorado), developed the Rosetta orbiter's IES and Alice instruments and hosts their principal investigators, James Burch (IES) and Joel Parker (Alice).