Following seven years of design and prototyping work, the Curtin University node of the International Centre for Radio Astronomy Research (ICRAR) has completed its preparations for the construction of the Square Kilometre Array (SKA) in Western Australia, which will begin next year.

130,000 individual radio antennas, along with associated electronics, will be built and spread over thousands of square kilometres at CSIRO’s Murchison Radio-astronomy Observatory (MRO), approximately 800 km north of Perth. This will work in tandem with an array of 197 dishes located in the Karoo in South Africa, north of Cape Town.

To be built by a global collaboration of 14 countries, the SKA will be one of the world’s largest science facilities, exploring the entire history and evolution of the Universe, and uncovering advances in fundamental physics.

Preparatory work in Western Australia has accelerated over the last two years through an international partnership of SKA countries (Australia, China, Italy, Malta, The Netherlands, and the UK) driven by ICRAR’S Curtin University node and Italy’s Istituto Nazionale di Astrofisica (National Institute of Astrophysics). Recently, this significant effort culminated in a successful System Critical Design Review conducted by the SKA Organisation, located near Manchester, UK, which coordinates the activities of the global collaboration. 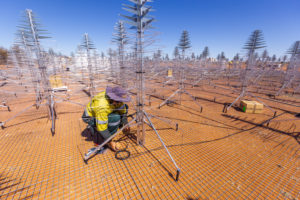 The ICRAR-Curtin University leader, John Curtin Distinguished Professor Steven Tingay said, “We have now passed the last major technical milestone before the international community commences construction of the SKA, with a budget of 1.87 billion euros over its first ten years.

“Over the last seven years, the Commonwealth Government has supported my team with $10.1M to reach this milestone, and a significant fraction of these funds has helped Western Australian industry to get ready for SKA construction contracts, especially around Geraldton and the State’s Mid-West.”

The search for the first stars 13 billion years ago, the discovery of missing matter in the Universe, and galaxy surveys of unprecedented scale feature among fundamental advances from the precursor telescopes, ready to be taken to the next level with the SKA. 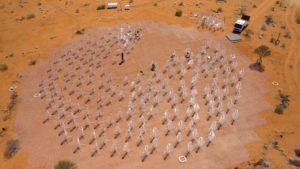 Both the Commonwealth Government and the Government of Western Australia have strongly supported the development of the SKA project over a significant period of time, and preparing Western Australian industry, particularly in our regions, for when construction starts is especially important in light of the impacts of COVID-19.

Beyond the COVID-19 pandemic, the SKA project will play a part in economic recovery, injecting hundreds of millions of much-needed dollars into the regional, Western Australian and Australian economies, as well as those of other SKA countries, over many years.

“All West Australians can be proud that our State is going to be the home to the SKA, one of the biggest science projects in human history,” said Western Australian Minister for Science, the Hon Dave Kelly MLA.

“Since 2009 the WA Government has provided funding of $71 million for ICRAR to attract the SKA to Western Australia and maximise benefits for the State through research, job creation, diversification of the economy and innovation,” he said.

“Through this investment, Western Australia has become a global hub for radio astronomy.”

Engineers from Australia and Italy are paving the way for the world’s biggest radio telescope—the Square Kilometre Array.