It’s one of the most baffling problems in astrophysics.  If the solar surface is 5,500℃, how can the solar atmosphere (the corona) be between 1 million and 10 million degrees C?

For the first time, scientists have observed nanojets, bright thin lights traveling perpendicular to the magnetic field lines of the Sun that are the telltale signature of nanoflares: localized, rapid heating events of the corona.

The issue of coronal heating was first identified by astrophysicists in the 1940s.  Since then, numerous hypotheses have been put forth to explain how the Sun’s atmosphere is many times hotter than its surface.

One such hypothesis put forward by Peter Gold and developed by Eugene Parker (for whom the Parker Solar Probe is named) is nanoflares, periodic small-scale heating events of the corona.

But a fundamental problem with this hypothesis — and others — was not being able to directly observe the complex physical processes at work in the corona.

Despite lacking a way to see the event, scientific models showed that a faint, hot emission from a nanoflare would be detectable and measurable.

To help study the corona in more detail, NASA developed the Interface Region Imaging Spectrograph (IRIS) spacecraft to determine how the corona is heated and directly measure and observe the processes taking place at the transition point between the solar surface and corona.

Built by Lockheed Martin, the 183 kg solar observatory was launched on 28 June 2013 (UTC) onboard a now-Northrop Grumman Pegasus-XL rocket off the coast of California.

Just over nine months later, it observed the event that led to yesterday’s nanojet discovery and coronal heating announcement published in the journal Nature Astronomy.

On 3 April 2014, IRIS observed a coronal rain event — when streams of cool plasma fall from the corona back toward the Sun’s surface.

During a period of 15 minutes, the portion of the corona under observation transitioned from a region filled with cool plasma to a place millions of degrees in temperature.

In examining the data obtained by IRIS, a team of international researchers led by Dr. Patrick Antolin of Northumbria University, observed bright jets near the end of the coronal rain event.

These flashes were streams of heated plasma traveling so fast they appeared as bright thin lines moving sideways through the magnetic field lines.

Those flashes are nanojets — the predicted proof of nanoflares.

The normally smooth magnetic field lines of the Sun can become tangled and woven together… and then violently snap back into their previously smooth selves.  That snap-back process is called reconnection, and it converts the energy stored in the solar magnetic field into motion in the plasma environment of the corona.

The localized plasma motion is quickly stopped by the surrounding plasma’s viscosity and turbulence in such a way that the motion (energy) is converted into heat — raising the localized coronal temperature.

A faint, hot emission (the observable nanojet) from this small heating event escapes and travels perpendicular to the magnetic field lines.

In and of itself, a small event like that would not explain the coronal heating problem.  But one magnetic reconnection event triggers another which triggers another… leading to a cascading series of reconnections and nanoflares and detectable nanojets.

This kind of cascading event is exactly what was observed by IRIS in the form of a “nanojet storm” during the same 15 minute period in April 2014 when the under-observation portion of the corona suddenly heated from a cool plasma region to a millions of degrees environment.

With these observations in hand, there was a strong link between nanojets, nanoflares, and magnetic reconnection as a coronal heating mechanism.  But more evidence was needed.

The international team of researchers then coordinated with NASA’s Solar Dynamics Observatory and the Hinode observatory of Japan, Europe, and NASA to obtain a full view of the Sun to confirm their nanojets detection and assess nanojet effects on the corona.

Over the next several years, the team utilized advanced, state-of-the-art simulations to recreate what they saw during the coronal heating event of April 2014.

Using all of the collected data, the models showed nanojets are a signature of magnetic reconnection and nanoflares and that the events do contribute to coronal heating.

“Using state-of-the-art numerical simulations, we have demonstrated that the nanojet is a consequence of the slingshot effect from the magnetically tensed, curved magnetic field lines reconnecting at small angles,” noted Dr. Antolin.  “Nanojets are therefore the key signature to look for reconnection-based coronal heating in action.” 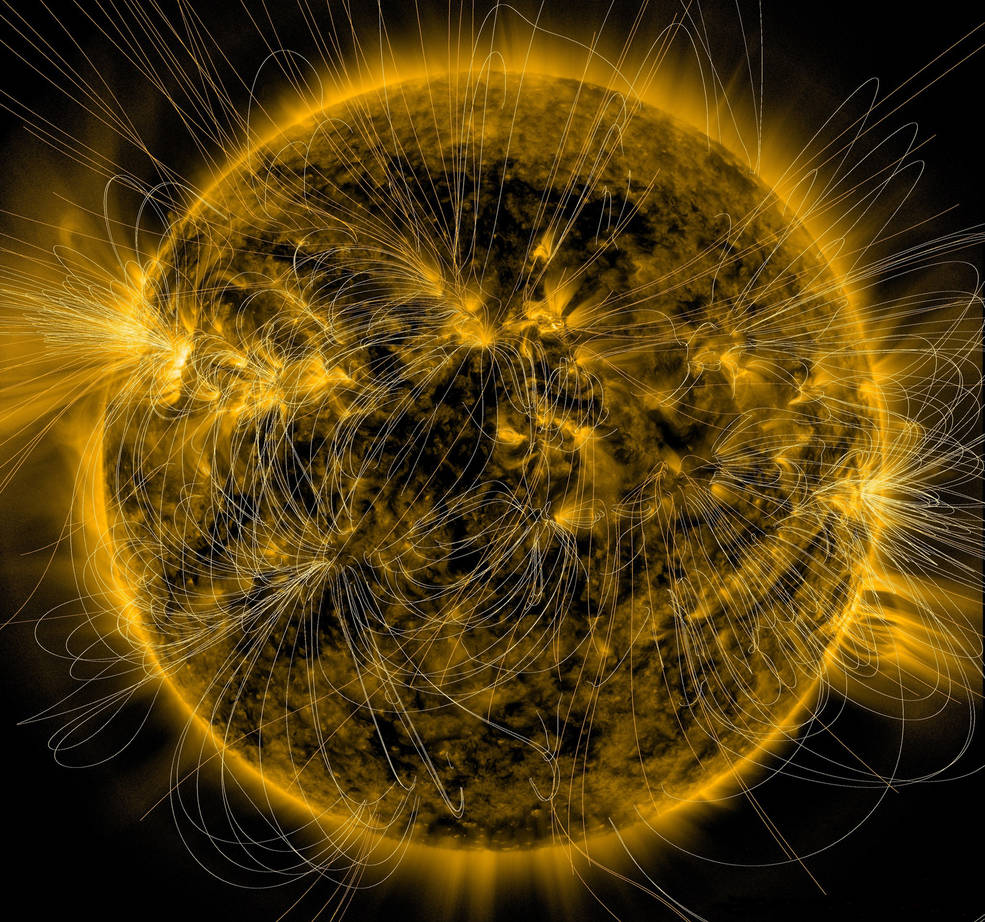 A magnetic map was created using the PFSS – Potential Field Source Surface – model, a model of the magnetic field in the sun’s atmosphere based on magnetic measurements of the solar surface. (Credit: NASA)

In announcing the nanojet discovery and evidence for coronal heating via magnetic reconnection and nanoflares, Dr. Antolin and his team were quick to note that additional observations and studies are needed to establish how frequent nanoflare activity is throughout the corona and exactly how much of the total energy for heating the corona those events provide.

They also caution, as many astrophysicists do, that a singular explanation for coronal heating is unlikely, and that the large up swing in temperatures seen in the solar atmosphere is likely the result of several complex and overlapping processes.

“The solar corona is very diverse, so it is likely there are many heating mechanisms,” said Dr. Antolin.  “In active regions, the most energy demanding regions, [magnetic reconnection] may dominate because it releases a lot of energy.”

IRIS is not the only mission currently seeking to unlock the mysteries of the corona.

NASA’s Parker Solar Probe, launched in August 2018, is the first spacecraft to directly fly into and study the corona from the inside.

Conversely, the European Space Agency’s Solar Orbiter, launched in February 2020, will aid in the investigation of coronal heating by seeking to understand how and where the Sun’s magnetic field forms in the corona.