SpaceX's Crew Dragon has arrived at the International Space Station, both in orbit and on a new postmark.

In commemoration of the historic docking — the first by a commercial spacecraft with astronauts on board — and to be ready for the SpaceX missions that are still to come, the U.S. Postal Service (USPS) has introduced a new pictorial postmark depicting the capsule and its destination. The SpaceX Crew Dragon design is now available on request from the Houston, Texas post office that services the NASA Johnson Space Center community.

"The Postal Service offers pictorial postmarks to commemorate local events," the USPS explains on it website.

While SpaceX's Demo-2 mission was launched from the Kennedy Space Center in Florida and SpaceX's mission control is located in Hawthorne, California, Johnson Space Center in Houston is home to the space station's flight control room and to NASA's astronaut corps, including the Dragon's first crew members, Bob Behnken and Doug Hurley.

The rectangular postmark shows the Crew Dragon approaching the space station from below. The capsule has its nose cone deployed, exposing the docking mechanism used to link the vehicle with a port on the station's Harmony module.

"ISS Mission Control Station" is written along the top of the postal device, with "Houston, TX 77058" running along the bottom. An additional inscription identifies the postmark's depicted scene as "Crew Dragon in Earth Orbit."

Stamp and space memorabilia collectors often seek to have stamped envelopes postmarked at relevant post offices on dates associated with milestone events. These "covers," as they are called, document when and where history was made and serve as a memento of the occasion.

The new SpaceX Crew Dragon postmark has a configurable date, so it can be used for events associated with the current Demo-2 mission or other Crew Dragon flights into the future. The USPS will honor requests for a specific date for 30 days, such that there is time (as of this writing) to still have the postmark applied for the May 31 "Dragonship Endeavour" docking, if desired.

To request the new postmark, the desired envelope(s) or postcard(s) should be affixed with the proper postage in stamps, self-addressed (or addressed to others of your choice) and then placed into a larger envelope addressed to:

The USPS recommends inserting a card of postcard thickness into the envelope you want postmarked for sturdiness and then tuck in the flap.

"Customers can also send stamped envelopes and postcards without addresses for postmark, as long as they supply a larger envelope with adequate postage and their return address. After applying the pictorial postmark, the Postal Service returns the items (with or without addresses) under addressed protective cover," the USPS instructs on its website.

Houstonians local to the Nassau Bay Post Office can also bring their envelopes or postcards to the branch to receive counter service.

The SpaceX Crew Dragon pictorial postmark is the next in a series of ISS Mission Control Station marks first offered in 2013. The prior postmarks depicted Russia's crewed Soyuz spacecraft and SpaceX's first-generation Dragon, which flew cargo to the space station. 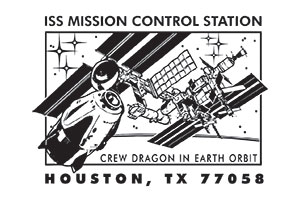