Just noticed that a video we've looked at before has a rotating jet-engine lens flare...

Bang! This isn't just an example of a rotating lens flare, but from jet engines. Only too obvious! It's from this video, and I inverted from white=hot to black=hot (perfectly reasonable to do) to compare.

Nice! I've added this to the OP.

What's driving this flare rotation, a camera rotation or the changing angle of the source? I'd think the latter wouldn't be sufficient to do it, but there's an easy impression or illusion that the rotation is tied to the source's changing angle.

Here's a video run of the side-by-side...


+++
I found yet another source for ATFLIR FOV settings,

From Jane's F/A-18 Flight Manual. But I can't find a date for that publication. We can see changes in the ATFLIR between the 2004 Nimitz and 2015(alleged) gimbal footage, and here we see a setting not listed in the other sources, ENAR. And true to its name, providing an even more narrowed FOV of 0.5˚. 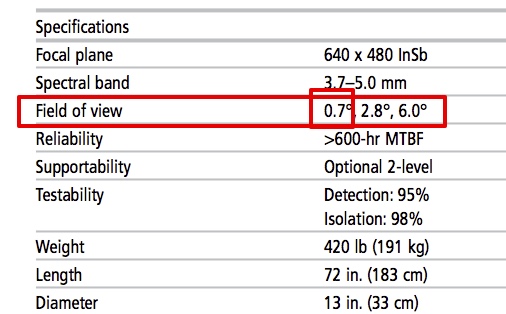 might reflect not NAR per se but the lower bound for NAR. Notice that according to the vrsimulations source Mick cites here, NAR is 1.5˚, and given that 2x magnification on top of that is possible, that would be a 0.75˚ maximum, or lower bound. If that's right, it seems more likely that the authors of the Raytheon ATFLIR flier excerpted above simply rounded down from 0.75˚ to 0.7˚ reflecting NAR's maximum magnification potential. In that case we don't have two conflicting sources but two compatible sources.
+++

Wrong. Unless your eyes are 100 feet apart. Do it with one eye/camera.

+++
And you don't really need anything fancy with relatively small angles. Halve the FOV and you double the size of things.
+++
It's based on a common graphic used to show human FOV, this being an example from:

Also google-image of field of view human eye shows many other instances of this display. So I'm not seeing why this implies the eyes are 100 feet apart. If we were to show the FOV captured in the NAR + 2x screen relative to that head, why would it not be a fraction of 1˚ on that circle?
+++

Is the error in the appearance that I'm depicting actual distance? If so, I need to make clear that I'm not. 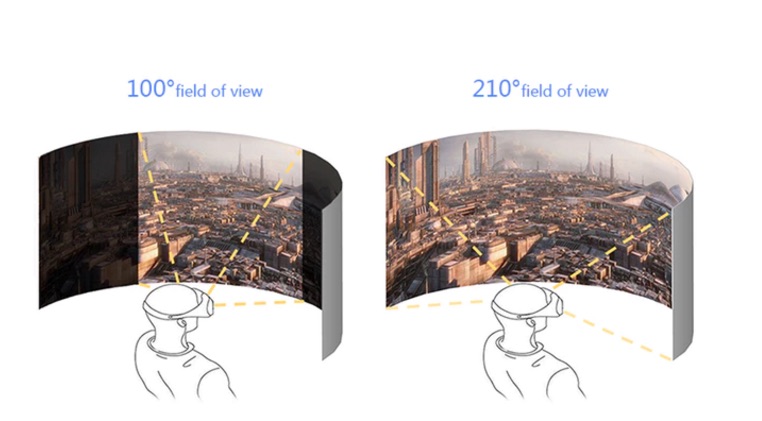 Also google-image of field of view human eye shows many other instances of this display. So I'm not seeing why this implies the eyes are 100 feet apart. If we were to show the FOV captured in the NAR + 2x screen relative to that head, why would it not be a fraction of 1˚ on that circle?

You show converging blue lines from the eyes. In reality the line would almost always diverge, so it's simplest to approximate the human visual system as a single camera.

However I'm not really clear what you are tying to show? That the plane would be a tiny dot to the naked eye? I posted some example photos upthread:

Here's an illustration of the type of thing we are looking at.

It was basically invisible to the naked eye. 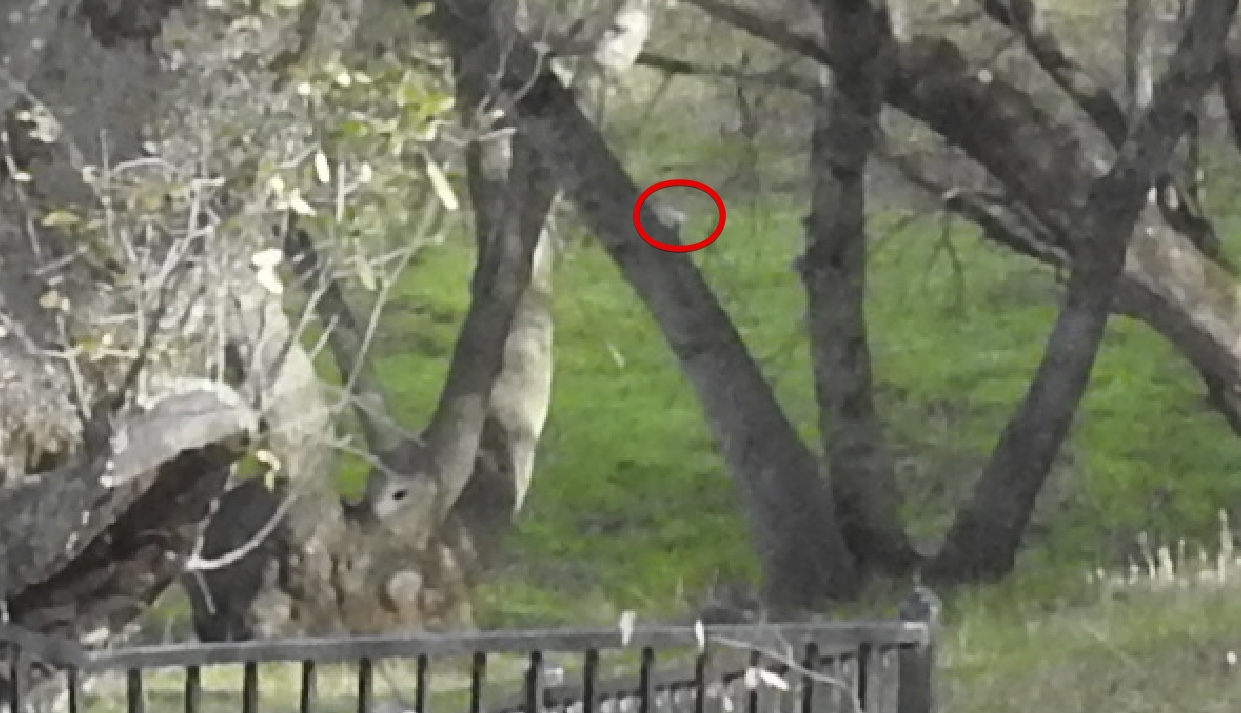 The naked eye view was just with the viewfinder magnification the same as naked eye. It does not represent human eye FOV, just human eye magnification. At actual wide angle, it's more like: 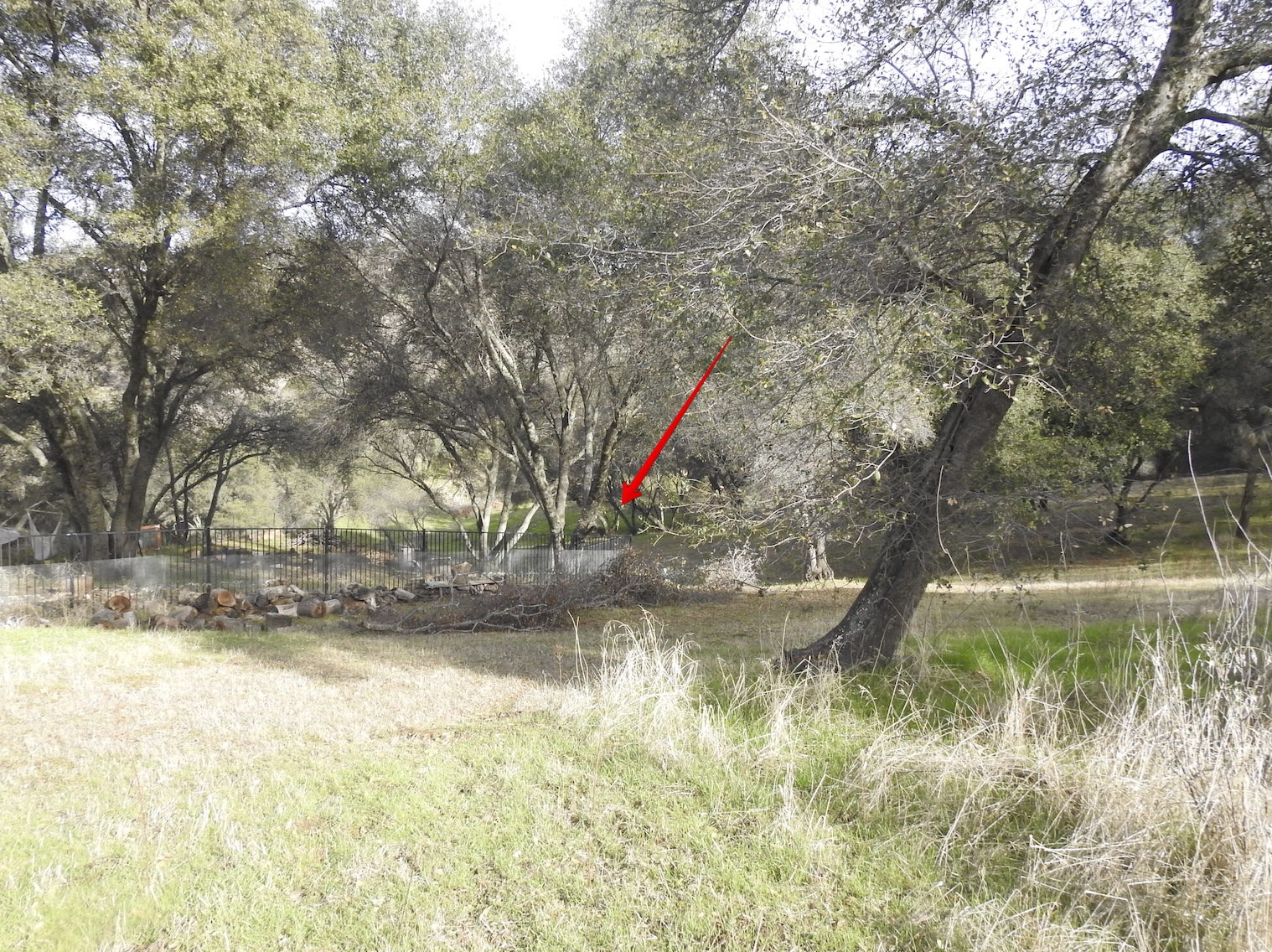 +++
That's a great example, but a graphical metric display strikes me as simpler and more meaningful, more obviously precise to the viewer. What about if I just kill the blue lines from the eyes?
+++

I confused as to exactly what point you are trying to make. Maybe something like: 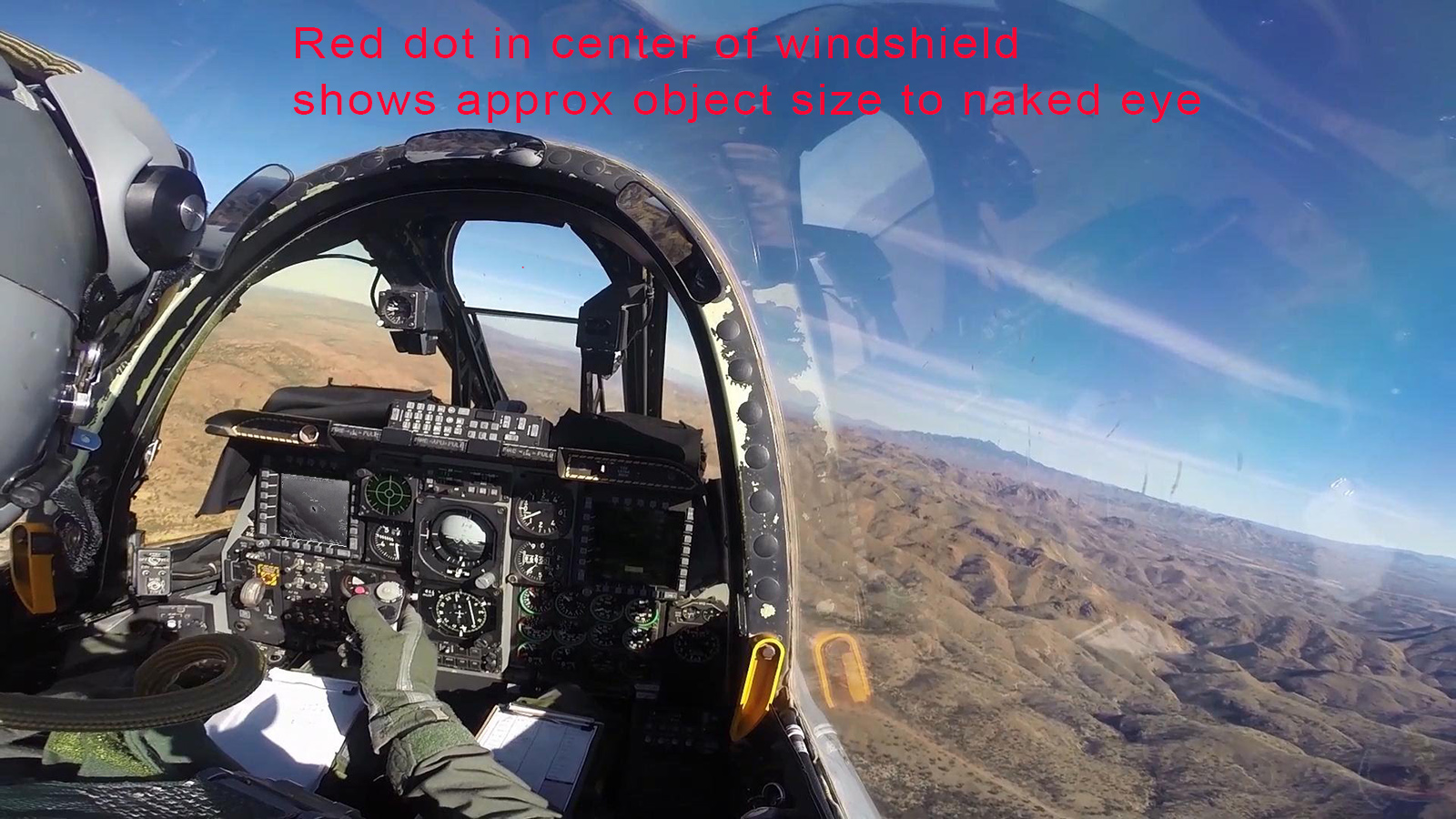 re you trying to show they (looking through real eyes) would never be able to find a tiny dot of an object in a big blue sky?

Pretty much, yes. Using the head gives people a sense of 'what it's like relative to my experience'.

A fingernail at arm's length, or a 1 cm object held 1 meter away, is about 0.6 degrees. The sun and moon are about half a degree. The object in the Nimitz video was only 1/25 of the FOV. Sit one meter away from the computer screen, and shrink the video to 1 cm.

Just noticed that a video we've looked at before has a rotating jet-engine lens flare...

Bang! This isn't just an example of a rotating lens flare, but from jet engines. Only too obvious! It's from this video, and I inverted from white=hot to black=hot (perfectly reasonable to do) to compare.

You see what I mean when I say the centroid tracker tends to lock onto hot spots.
And the plume is not that visible from the side, compared to the hot engines.
+++

That's not what the specs say. "NAR" appears nowhere in the specs sheet.

Unless you know of another specs sheet.

Thanks! Very important too since then we have exactly the ATFLIR causing an engine-flare rotation. I mistranslated the Russian text for the video.

+++
Here's my depiction of the size of the ATFLIR screen and then UFO only @ ~0.75˚ FOV. I had to more than double the size of the UFO just so the least spec would show up, which may be fair as normal visual resolution is finer. 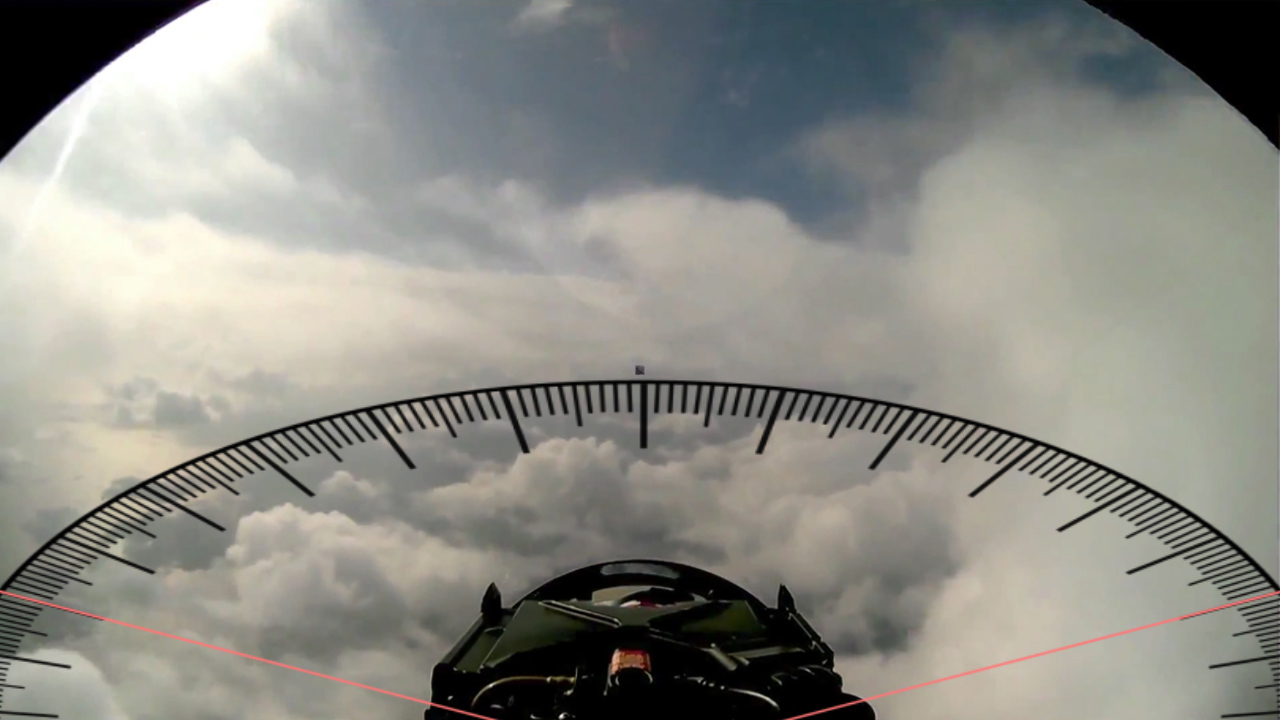 Now showing only the UFO and the rest of the ATFLIR screen removed. The screen above was reduced to 1.9% in my video editor to fit into ~0.75˚, I had to increase the size of the UFO from 1.9 to 5% just to get the faintest spec of it to appear. 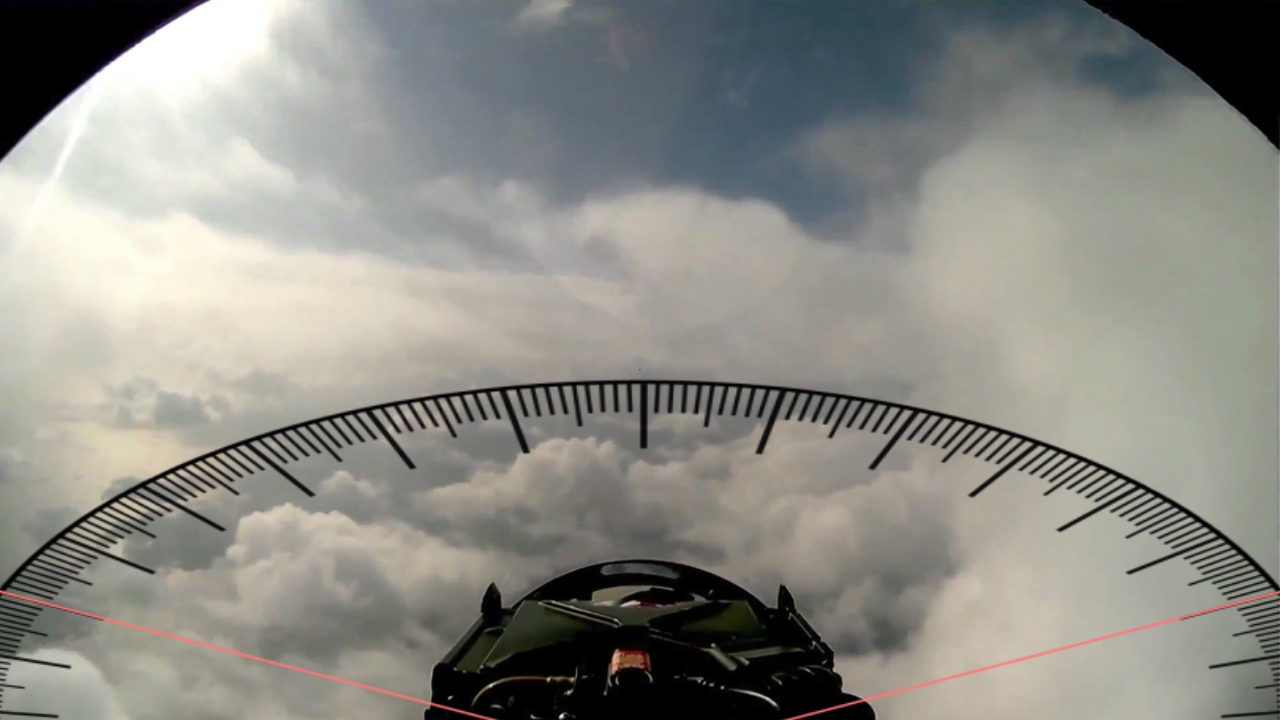 So I'm not yet persuaded that it would be meaningfully visible if at all.
+++

I spent a lot of time reading patents and ATFLIR literature trying to refute your take on the ATFLIR's target modeling but, alas, I couldn't.

So I have to agree with you. I can't find any support for my original thesis that it models a target in a multi-sensor fashion.

Thanks guys for the feedback on depicting the gimbal-footage FOV. Here's an update...

Folks not steeped in FOV or ATFLIR FOV settings would, imo, want to see the FOV metrics to understand.

Oddly when I make the GIF animation smaller, its file size increases. So I've kept it 1280x720, and that also allows one to see the tiny spec of just the gimbal UFO at the end (click to enlarge).

Names are arbitrary, hardware is not. I think the specs describe the optics. It would be counterproductive to mix up digital zoom with optical zoom.

So the 2.0 zoom is purely digital? I prefer to cite what I can directly show (as with the NAR = 1.5˚ FOV reference that expressly stats that) rather than my interpretation of figures that I have to argue for (ie, that the 0.7˚ FOV is that native state of NAR even though the specs don't state that expressly it follows from there being three settings, at least back in 2009).

+++
Doing some background research on the Su-27 on ATFLIR footage I found an earlier posting of it (posted here on Sep 21, 2017 versus the youtube copy posted on Sep 24), and the resolution of this earlier posting is better, suggesting the youtube posting may be a copy of this:

That footage of the Su-27 was taken during events over Syria that ended in a Russian Su-22 being shot down by a U.S. F-18 on June 18, 2017. The Su-27 footage is cited in this Drive article about the Su-22 shoot down, and another Drive articledescribes the Su-27's involvement thus:

The group of four strike fighters entered the close air support stack (CAS stack) overhead the JTAC and waited for any requests for strikes when a Russian Su-27 showed up and began loitering high overhead.

Mob, who was having issues with his targeting pod, was assigned to keep tabs on the circling Russian fighter while the other pilots continued with their CAS mission. He turned the Super Hornet's master mode to air-to-air and began tracking the Su-27 and searching the skies around the area for other aircraft.

Content from external source
Most media accounts do no mention the presence of the Su-27, but there it is. I wanted to shore that up in case the description alongside the youtube copy of the footage might be wrong, as it cites the same date the Su-22 was shot down. That youtube account hosting the copy is associated with a Russian blog that, according to Google Translation, has this to say about the Su-27:

The F / A-18 E Super Hornet tracking video was posted, using the ATFLIR sighting and navigation system, behind the Russian Su-27 during the operation of US Navy aircraft, which resulted in the shot down of the Su-22 Syrian Air Force on June 18 this year.

In the operation to attack the targets of IGIL, which was held on June 18, 2017, four aircraft from USS George H. W. Bush (CVN-77), including two F / A-18Cs and two F / A-18Es, participated. At the very beginning of the operation near the American aircraft appeared Russian Su-27, which began to observe what was happening from a great height.

So the 2.0 zoom is purely digital? I prefer to cite what I can directly show (as with the NAR = 1.5˚ FOV reference that expressly stats that) rather than my interpretation of figures that I have to argue for (ie, that the 0.7˚ FOV is that native state of NAR even though the specs don't state that expressly it follows from there being three settings, at least back in 2009).

I assumed the 2X zoom is digital. It's instant and is treated differently from the FOV changes. The vrsimulations source says, "Each field of view can be further narrowed by up to 2x in 10 discrete steps." It also says that NAR is 1.5˚, but doesn't cite any references. Jane's said NAR is 1˚, but it skipped Medium FOV. There's another old reference that says, "ATFLIR’s magnification is 30X versus previous FLIR capability at 4X," which suggests 1.4˚.
Marine Corps Warfighting Publication (MCWP) 3-26, Air Reconnaissance, 2001

Near the end of the Nimitz "tic tac" video, the camera was panning at about 0.2˚/sec to track the target, and when it lost lock, the target moved a quarter of the FOV in about a second, so if the velocity was the same, then the FOV would be around 0.2*4=0.8˚. But the display may crop the 640x480 image to 480x480. That's why knowing the IFOV would help.

+++
Hay, I just made a possibly important observation... the flare rotation seen in the Su-27 video occurs as the view of the Su-27 becomes directly rear-on, ie, ostensibly also as LOS sweeps across 0˚.
+++
For what it's worth, in the latest Big Picture Science episode, retired Air Force pilot and astronomer James McGaha agreed that the video shows an airplane from behind, and that its apparent rotation was a camera artifact.
http://blog.bigpicturescience.org/2018/01/big-picture-science-skeptic-check-new-ufo-evidence/
+++
Quelle: Mick West / Metabunk