n this artistic composition, based on a real image of the IceCube Lab at the South Pole, a distant source emits neutrinos that are detected below the ice by IceCube sensors, called DOMs. ICECUBE COLLABORATION/NSF

A sensor from the enormous Antarctic observatory IceCube has joined the permanent collection of the Smithsonian Institution.

Headquartered at the University of Wisconsin–Madison, IceCube uses thousands of these sensors embedded in a cubic kilometer of ice underneath the South Pole to track neutrinos, invisible subatomic particles that traverse space at nearly the speed of light. The sensors, called digital optical modules, or DOMs, detect the flash of blue light created when a neutrino crashes into a molecule of ice.

In 2018, IceCube reported that they had detected a high-energy neutrino coming from the supermassive black hole at the center of a distant galaxy near the constellation Orion. The results solved a century-old mystery about the origin of cosmic rays — energetic particles that constantly pelt Earth’s atmosphere. 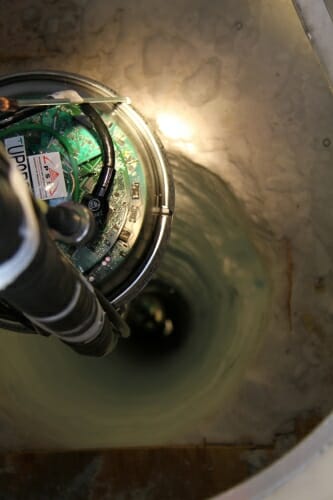 The completion of IceCube was a milestone for science, and it reflects the efforts of hundreds to people over seven seasons of construction. The last digital optical module in the IceCube array descended into the ice on December 18, 2010, just before 6:00 pm South Pole time. ICECUBE COLLABORATION/NSF

The Smithsonian received the DOM, which was manufactured at UW–Madison’s Physical Sciences Laboratory in Stoughton, Wis., in early May.

“Having this DOM preserved in the annals of history in the Smithsonian collection is very gratifying feeling,” says Kael Hanson, the director of operations for IceCube and a professor of physics at UW–Madison.

David DeVorkin, the curator for the history of astronomy at the Smithsonian’s National Air and Space Museum, nominated the IceCube DOM for inclusion in the collection because of the project’s role in the development of multi-messenger astrophysics. This developing field relies on signals, or messengers, that go beyond light, such as gravitational waves or particles like neutrinos, to better understand the universe.

IceCube’s discovery of the origin of cosmic rays was a prime example of the power of multi-messenger astronomy. The finding relied on years of neutrino data collected by IceCube as well as light across the energy spectrum gathered by more than a dozen telescopes. The results were announced in July of 2018 at the headquarters of the National Science Foundation, the principal funder of IceCube, which encompasses 300 scientists from institutions around the world. 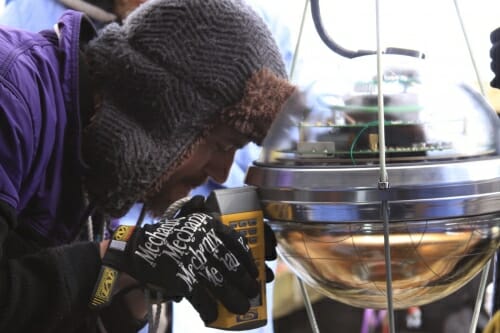 After careful measurements, crews fed 60 sensors onto a cable and lowered them into the ice. Sensor deployment took about 11 hours per hole. ICECUBE COLLABORATION/NSF

“It’s a dramatic instrument,” DeVorkin says of IceCube. “It was very creative in using the rigid structure of the ice sheet to maintain these detectors, providing much greater resolution.”

The DOMs were designed at the Physical Sciences Laboratory to withstand the crushing pressures found underneath up to a mile and a half of ice. More than 5,000 sensors are deployed on 86 strings that IceCube scientists installed in the ice over seven Antarctic summers using a hot-water drill that was also designed at the Physical Sciences Laboratory in Stoughton.

“We’ve been improving the design of these optical sensors we put down in the South Pole ice ever since the mid-90s,” says Hanson. “Some of them have been in the ice for 15 years and we still have 98 percent of them working, so it’s a tribute to all the engineering and the hard work of the entire team that went into designing them.”

DeVorkin is now helping develop a new exhibition slated for a future gallery as part of the renovation of the museum’s building in Washington, D.C., which will highlight the increasing clarity about our universe provided by multi-messenger collaborations like IceCube.

“Collecting the object’s one thing, but what story it tells to the public is a whole other element,” says DeVorkin. 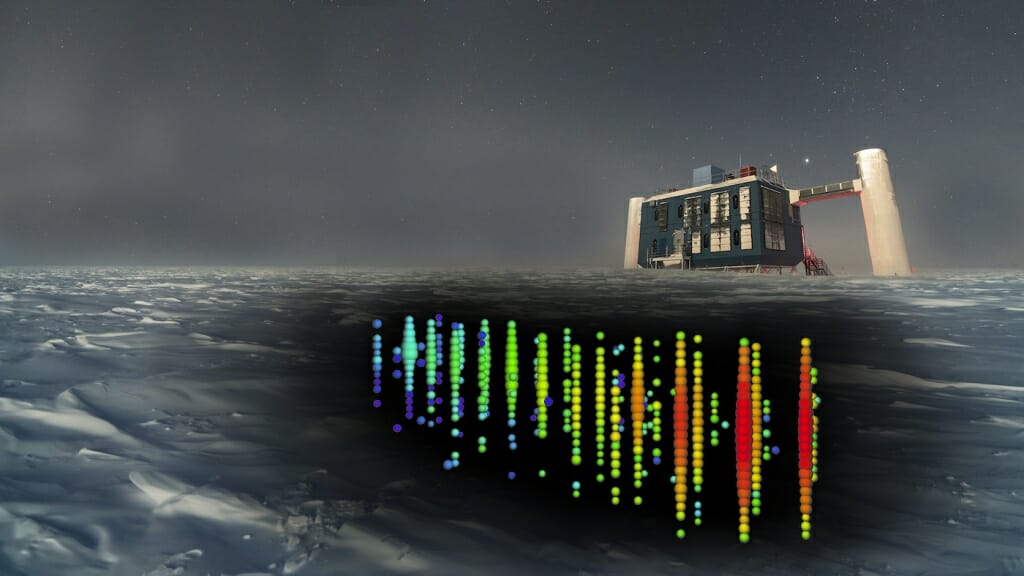 The IceCube Neutrino Observatory is buried at depths between 1.5 and 2.5 kilometers below the South Pole. The only visible equipment is the IceCube Lab, also called the ICL, which hosts the computers that collect data from the over 5,000 light sensors, called DOMS, in the ice. In this artistic rendering, based on a real image of the ICL, the neutrino-detection event that identified the origin of cosmic rays is shown in the ice below Antarctica’s surface. ICECUBE COLLABORATION/NSF