Dolphin-Shaped Cloud Swims Across Jupiter in This Awesome NASA View

A dolphin-shaped cloud is visible in these Oct. 29 images of Jupiter's southern belt.

While NASA released the photo to the public on Nov. 30, photographer Seán Doran (one of its creators) showcased the image weeks earlier in a Nov. 7 Twitter post. Doran has been processing amazing images of Jupiter based on Juno data since the spacecraft arrived at the gas giant, and along with other space imagery and video based on actual spacecraft data.

The dolphin appears to be swimming through cloud bands along Jupiter's South South Temperate Belt. Juno captured this scene at about 32 to 59 degrees south latitude.

The Juno mission has been gathering observations of the largest planet in the solar system since arriving in July 2016. It's currently scheduled to remain operational until 2021.

People have downloaded the raw images of Jupiter and processed them, often revealing new details of its surface

Nasa's Juno mission to the gas giant Jupiter has reached its halfway mark and has revealed new views of cyclones at the poles.

As it orbits the planet every 53 days - Juno performs a science-gathering dive, speeding from pole to pole.

Its sensors take measurements of the composition of the planet, in an effort to decipher how the largest world in our Solar System formed.

JunoCam has seen giant cyclones at the poles

But images from JunoCam - a camera that was intended to capture images that could be shared with the public - has already given us some surprising insights.

Dr Candice Hansen, from the Planetary Science Institute in Arizona, is leading the JunoCam project, which she described as "our little outreach camera". She presented some of the remarkable images from the camera - raw images downloaded and processed by members of the public - at the American Geophysical Union meeting here in Washington DC.

When we made our first pass over the poles, we knew we were seeing a territory on Jupiter we had never seen before," said Prof Hansen.

"What we did not expect was that we would see these orderly polygons of cyclones; huge storms - twice the size of Texas.

And 16 passes later, she added, those orderly arrangements of giant storms are still there.

These "pretty pictures" are starting to teach scientists about how the largest planet in the Solar System formed and evolved.

"The objective for the Juno mission is to study the interior structure of Jupiter and how that structure expresses itself out on the cloud tops. That's the kind of connection we're trying to make. But we're not there yet."

The dynamics of the surface could reveal Jupiter's deeper structure

Jack Connerney, Juno deputy principal investigator from the Space Research Corporation in Annapolis, Maryland, said that the second half of the mission would provide an even more detailed view of "what makes the whole of Jupiter tick".

A south tropical disturbance has just passed Jupiter's iconic Great Red Spot and is captured stealing threads of orange haze from the Great Red Spot in this series of color-enhanced images from NASA's Juno spacecraft. From left to right, this sequence of images was taken between 2:57 a.m. and 3:36 a.m. PDT (5:57 a.m. and 6:36 a.m. EDT) on April 1, 2018, as the spacecraft performed its 12th close flyby of Jupiter. Citizen scientists Gerald Eichstädt and Seán Doran created this image using data from the spacecraft's JunoCam imager.
Credits: NASA/JPL-Caltech/SwRI/MSSS/Gerald Eichstädt/Seán Doran

Juno is in a highly-elliptical 53-day orbit around Jupiter. Each orbit includes a close passage over the planet's cloud deck, where it flies a ground track that extends from Jupiter's north pole to its south pole. 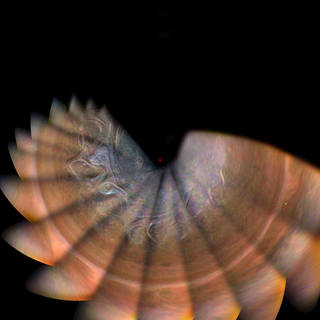 This mosaic combines color-enhanced images taken over Jupiter's north pole when the lighting was excellent for detecting high bands of haze. The images were taken in the final hours of Juno's perijove 12 approach on April 1, 2018. Citizen scientists Gerald Eichstädt and John Rogers created this image using data from the spacecraft's JunoCam imager.
Credits: NASA/JPL-Caltech/SwRI/MSSS/Gerald Eichstädt/John Rogers 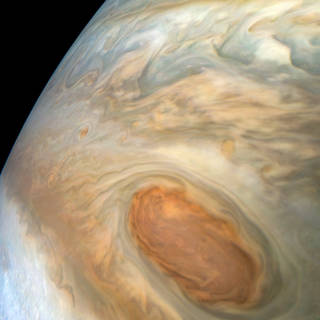 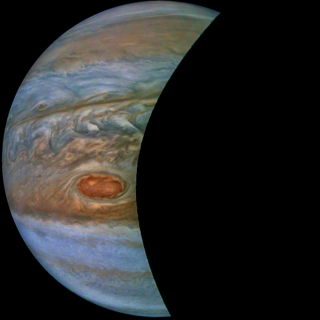 A "brown barge" in Jupiter's South Equatorial Belt is captured in this color-enhanced image from NASA's Juno spacecraft. This color-enhanced image was taken at 10:28 p.m. PDT on July 15, 2018 (1:28 a.m. EDT on July 16), as the spacecraft performed its 14th close flyby of Jupiter. Citizen scientist Joaquin Camarena created this image using data from the spacecraft's JunoCam imager.
Credits: NASA/JPL-Caltech/SwRI/MSSS/Joaquin Camarena 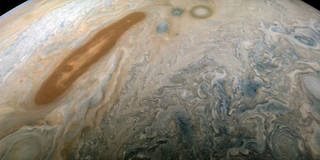 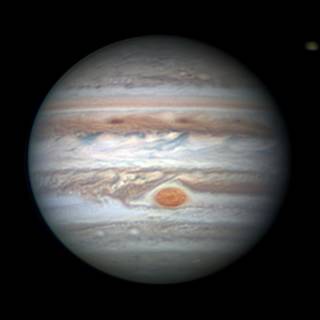 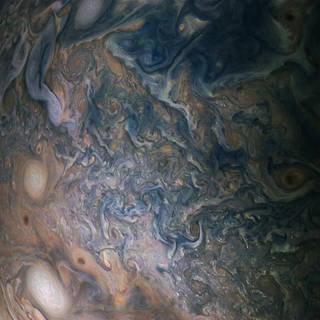 A multitude of bright white "pop-up" storms in this Jupiter cloudscape appear in this image from NASA's Juno spacecraft. This color-enhanced image was taken at 1:55 p.m. PDT (4:55 p.m. EDT) on Oct. 29, 2018, as the spacecraft performed its 16th close flyby of Jupiter. Citizen scientists Gerald Eichstädt and Seán Doran created this image using data from the spacecraft's JunoCam imager.
Credits: NASA/JPL-Caltech/SwRI/MSSS/Gerald Eichstädt/Seán Doran 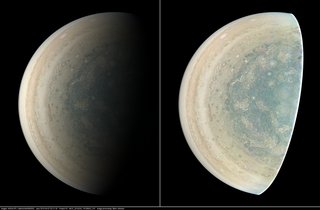 This image was taken at 7:21 p.m. PDT (10:21 p.m. EDT) on Sept. 6, 2018, as the spacecraft performed its 15th close flyby of Jupiter. The version of the image on the left side shows Jupiter in approximate true color, while the same image on the right has been processed to bring out detail close to the terminator and reveals four of the five southern circumpolar cyclones plus the cyclone in the center. Citizen scientist Björn Jónsson created this image using data from the spacecraft's JunoCam imager.
Credits: NASA/JPL-Caltech/SwRI/MSSS/Björn Jónsson

"With our 16th science flyby, we will have complete global coverage of Jupiter, albeit at coarse resolution, with polar passes separated by 22.5 degrees of longitude," said Jack Connerney, Juno deputy principal investigator from the Space Research Corporation in Annapolis, Maryland. "Over the second half of our prime mission — science flybys 17 through 32 — we will split the difference, flying exactly halfway between each previous orbit. This will provide coverage of the planet every 11.25 degrees of longitude, providing a more detailed picture of what makes the whole of Jupiter tick."

Launched on Aug. 5, 2011, from Cape Canaveral, Florida, the spacecraft entered orbit around Jupiter on July 4, 2016. Its science collection began in earnest on the Aug. 27, 2016, flyby. During these flybys, Juno's suite of sensitive science instruments probes beneath the planet's obscuring cloud cover and studies Jupiter's auroras to learn more about the planet's origins, interior structure, atmosphere and magnetosphere.

"We have already rewritten the textbooks on how Jupiter's atmosphere works, and on the complexity and asymmetry of its magnetic field," said Scott Bolton, principal investigator of Juno, from the Southwest Research Institute in San Antonio. "The second half should provide the detail that we can use to refine our understanding of the depth of Jupiter's zonal winds, the generation of its magnetic field, and the structure and evolution of its interior."

Two instruments aboard Juno, the Stellar Reference Unit and JunoCam, have proven to be useful not only for their intended purposes, but also for science data collection. The Stellar Reference Unit (SRU) was designed to collect engineering data used for navigation and attitude determination, so the scientists were pleased to find that it has scientific uses as well.

"We always knew the SRU had a vital engineering job to do for Juno," said Heidi Becker, Juno's radiation monitoring investigation lead at NASA's Jet Propulsion Laboratory in Pasadena, California. "But after making scientific discoveries in Jupiter's radiation belts and taking a first-of-its-kind image of Jupiter's ring, we realized the added value of the data. There is serious scientific interest in what the SRU can tell us about Jupiter."

The JunoCam imager was conceived as an outreach instrument to bring the excitement and beauty of Jupiter exploration to the public.

"While originally envisioned solely as an outreach instrument to help tell the Juno story, JunoCam has become much more than that," said Candy Hansen, Juno co-investigator at the Planetary Science Institute in Tucson, Arizona. "Our time-lapse sequences of images over the poles allow us to study the dynamics of Jupiter's unique circumpolar cyclones and to image high-altitude hazes. We are also using JunoCam to study the structure of the Great Red Spot and its interaction with its surroundings."

The SRU and JunoCam teams both now have several peer-reviewed science papers —either published or in the works — to their credit.

NASA's Juno spacecraft has captured an intriguing image of a volcanic plume straddling the line between day and night on Jupiter's notoriously eruptive moon Io.

The image is part of a larger data set gathered on the spacecraft's Dec. 21 close skim over the planet's surface, when four of Juno's cameras spent more than an hour watching the volcanic moon's pole. All told, the observations are a nice scientific bonus for the Juno team, because the spacecraft's primary job is to study Jupiter itself.

"We knew we were breaking new ground with a multispectral campaign to view Io's polar region, but no one expected we would get so lucky as to see an active volcanic plume shooting material off the moon's surface," Scott Bolton, principal investigator of the Juno mission, said in a statement released by the Southwest Research Institute, which contributed two instruments to the mission. "This is quite a New Year's present, showing us that Juno has the ability to clearly see plumes."

Juno's visible light camera, JunoCam, spotted a volcanic plume right along Io's terminator, the line between the daylight side and the night side. The spacecraft was 186,000 miles (300,000 kilometers) away from the moon.
Credit: NASA/SwRI/MSSS

The spacecraft's observing period was split into two phases, because Jupiter came between the sun and Io. Before that eclipse, the visible-light camera JunoCam could study Io in stronger light, watching the pole as day turned to night. The camera snagged three images during this period, all of which caught sight of a plume right along the moon's terminator, where day and night meet.

"The ground is already in shadow, but the height of the plume allows it to reflect sunlight, much like the way mountaintops or clouds on the Earth continue to be lit after the sun has set," Candice Hansen-Koharcheck, the JunoCam lead from the Planetary Science Institute, said in the same statement.

Juno's Stellar Reference Unit camera, which helps the spacecraft navigate by the stars, captured this image of a faintly lit Io. The plume is highlighted by the small circle.

After Jupiter blocked out the sun, Juno's Stellar Reference Unit camera took over. That instrument is designed to help the spacecraft track its location in the cosmos, but the camera requires fainter lighting — like the sunlight reflected off nearby moon Europa during the observing period. However, this camera also spotted evidence of the plume.

A third instrument, the Jovian Infrared Auroral Mapper (JIRAM), was also active during the observing period, capturing information about hotspots on the moon's surface. In July, that same instrument spotted a previously undetected hotspot on the volcanic moon.

Scientists have known Io is volcanically active since 1979. The activity is spurred by Jupiter's massive gravity tugging at the moon.

A giant, spiraling storm in Jupiter’s southern hemisphere is captured in this animation from NASA’s Juno spacecraft. The storm is approximately 5,000 miles (8,000 kilometers) across.

The counterclockwise motion of the storm, called Oval BA, is clearly on display. A similar rotation can be seen in the famous Great Red Spot at the top of the animation.