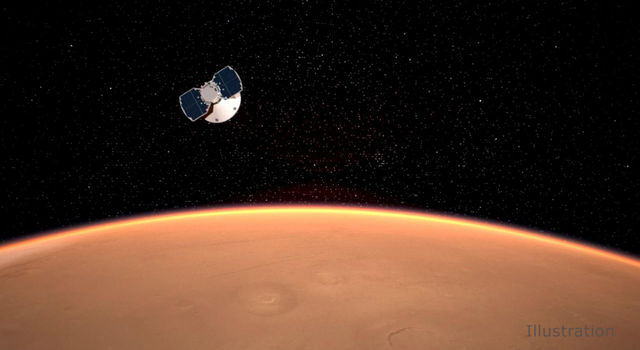 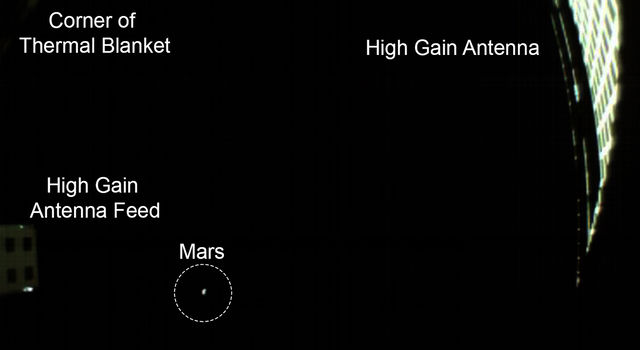 NASA's twin MarCO spacecraft are scheduled to make a flyby of Mars on Nov. 26. On Nov. 24, a wide-angle camera on MarCO-B took this picture of the Red Planet, which appears as small, grey dot in the lower left quadrant of the image.
.

The fourth paragraph has been updated with information about the trajectory correction maneuver conducted by the mission team on the afternoon of Nov. 25.

Engineers at NASA's Jet Propulsion Laboratory in Pasadena, California, which leads the mission, are preparing for the spacecraft to enter the Martian atmosphere, descend with a parachute and retrorockets, and touch down tomorrow at around noon PST (3 p.m. EST). InSight - which stands for Interior Exploration using Seismic Investigations, Geodesy and Heat Transport - will be the first mission to study the deep interior of Mars.

"We've studied Mars from orbit and from the surface since 1965, learning about its weather, atmosphere, geology and surface chemistry," said Lori Glaze, acting director of the Planetary Science Division in NASA's Science Mission Directorate. "Now we finally will explore inside Mars and deepen our understanding of our terrestrial neighbor as NASA prepares to send human explorers deeper into the solar system."

Before InSight enters the Martian atmosphere, there are a few final preparations to make. At 1:47 PST (4:47 EST) engineers successfully conducted a last trajectory correction maneuver to steer the spacecraft within a few kilometers of its targeted entry point over Mars. About two hours before hitting the atmosphere, the entry, descent and landing (EDL) team might also upload some final tweaks to the algorithm that guides the spacecraft safely to the surface.

These will be the last commands issued to InSight before it robotically guides itself the rest of the way. The EDL team worked for months beforehand to pre-program every stage of InSight's landing, making adjustments based on weather reports from NASA's Mars Reconnaissance Orbiter.

"While most of the country was enjoying Thanksgiving with their family and friends, the InSight team was busy making the final preparations for Monday's landing," said Tom Hoffman of JPL, InSight's project manager. "Landing on Mars is difficult and takes a lot of personal sacrifices, such as missing the traditional Thanksgiving, but making InSight successful is well worth the extraordinary effort."

Engineers will be huddled with scientists at JPL on Nov. 26, watching with nervous anticipation for signals that InSight successfully touched down.

"It's taken more than a decade to bring InSight from a concept to a spacecraft approaching Mars - and even longer since I was first inspired to try to undertake this kind of mission," said Bruce Banerdt of JPL, InSight's principal investigator. "But even after landing, we'll need to be patient for the science to begin."

It will take two to three months for InSight's robotic arm to set the mission's instruments on the surface. During that time, engineers will monitor the environment and photograph the terrain in front of the lander.

Back at JPL, the surface operations team will practice setting down the instruments. They'll use a working replica of InSight in an indoor "Mars sandbox," which will be sculpted to match the mission's actual landing site on Mars. The team will check to make sure the instruments can be deployed safely, even if there are rocks nearby or InSight lands at an angle.

Once the final position of each instrument is decided, it will take several weeks to carefully lift each one and calibrate their measurements. Then the science really gets underway.

NASA’s next mission to Mars, the InSight lander, is scheduled to land around noon PST on Monday, Nov. 26. So while some people are looking for Cyber Monday deals, scientists and engineers at NASA’s Jet Propulsion Laboratory will be monitoring their screens for something else: signals from the spacecraft that it successfully touched down on the Red Planet.

InSight has spent nearly seven months in space, kicked off by the first interplanetary launch from the West Coast of the U.S. Once it arrives at the Red Planet, InSight will have to perform its entry, descent and landing, or EDL, to safely touch down on the Martian surface. This is perhaps the most dangerous part of the entire mission because it requires that the spacecraft withstand temperatures near 1,500 degrees Fahrenheit, quickly put on its brakes by using the atmosphere to slow down, then release a supersonic parachute and finally lower itself to the surface using 12 retrorockets.

When NASA’s InSight descends to the Red Planet on Nov. 26, 2018, it is guaranteed to be a white-knuckle event. Rob Manning, chief engineer at NASA’s Jet Propulsion Laboratory, explains the critical steps that must happen in perfect sequence to get the robotic lander safely to the surface. | Watch on YouTube

But even after that harrowing trip to the surface, InSight will have to overcome one more challenge before it can get to the most important part of the mission, the science. After a thorough survey of its landing area, InSight will need to carefully deploy each of its science instruments to the surface of Mars. It may sound like an easy task, but it’s one that requires precision and patience.

It’s also a great opportunity for educators to engage students in NASA’s exploration of Mars and the importance of planetary science while making real-world connections to lessons in science, coding and engineering. Read on to find out how.

How It Works: Deploying InSight’s Instruments

InSight is equipped with three science investigations with which to study the deep interior of Mars for the first time. The Seismic Experiment for Interior Structures, or SEIS, is a seismometer that will record seismic waves traveling through the interior of Mars.

These waves can be created by marsquakes, or even meteorites striking the surface. The Heat Flow and Physical Properties Package, or HP3, will investigate how much heat is still flowing out of Mars. It will do so by hammering a probe down to a depth of up to 16 feet (about 5 meters) underground. The Rotation and Interior Structure Experiment, or RISE, will use InSight’s telecommunications system to precisely track the movement of Mars through space. This will shed light on the makeup of Mars’ iron-rich core.

But to start capturing much of that science data, InSight will have to first carefully move the SEIS and HP3instruments from its stowage area on the lander deck and place them in precise locations on the ground. Among its many firsts, InSight will be the first spacecraft to use a robotic arm to place instruments on the surface of Mars. Even though each instrument will need to be lowered only a little more than three feet (1 meter) to the ground, it’s a delicate maneuver that the team will rehearse to make sure they get it right.

InSight’s robotic arm is nearly 6 feet (about 2 meters) long. At the end of the arm is a five-fingered grappler that is designed to grab SEIS and HP3 from the deck of the lander and place them on the ground in front of the lander in a manner similar to how a claw game grabs prizes and deposits them in the collection chute. But on Mars, it has to work every time.

InSight will be the first mission on another planet to use a robotic arm to grasp instruments and place them on the surface. While it may look like an arcade machine, this space claw is designed to come away with a prize every time. | Watch on YouTube

Before the instruments can be set down, the area where they will be deployed – commonly referred to as the work space – must be assessed so SEIS and HP3 can be positioned in the best possible spots to meet their science goals. InSight is designed to land with the solar panels at an east-west orientation and the robotic arm facing south. The work space covers about three-square meters to the south of the rover. Because InSight is a three-legged lander and not a six-wheeled rover, science and engineering teams must find the best areas to deploy the instruments within the limited work space at InSight’s landing spot. That is why choosing the best landing site (which for InSight means one that is very flat and has few rocks) is so important.

Just as having two eyes gives us the ability to perceive depth, InSight will use a camera on its robotic arm to take what are known as stereo-pair images. These image pairs, made by taking a photo and then moving the camera slightly to the side for another image, provide 3D elevation information that’s used by the science and engineering teams. With this information, they can build terrain maps that show roughness and tilt, and generate something called a goodness map to help identify the best location to place each instrument. Evaluating the work space is expected to take a few weeks.

Once the team has selected the locations where they plan to deploy the instruments, the robotic arm will use its grapple to first grab SEIS and lower it to the surface. When the team confirms that the instrument is on the ground, the grapple will be released and images will be taken. If the team decides they like where the instrument is placed, it will be leveled, and the seismic sensor will be re-centered so it can be calibrated to collect scientific data. If the location is deemed unsuitable, InSight will use its robotic arm to reposition SEIS.

› Visit Experience InSight to explore this animation and more.

But wait, there’s more! SEIS is sensitive to changes in air pressure, wind and even local magnetic fields. In fact, it is so sensitive that it can detect ground movement as small as half the radius of a hydrogen atom! So that the instrument isn’t affected by the wind and changes in temperature, the robotic arm will have to cover SEIS with the Wind and Thermal Shield.

› Visit Experience InSight to explore this animation and more.

After SEIS is on the ground and covered by the shield, and the deployment team is satisfied with their placement, the robotic arm will grab the HP3 instrument and place it on the surface. Just as with SEIS, once the team receives confirmation that HP3 is on the ground, the grapple will be released and the stability of the instrument will be confirmed. The final step in deploying the science instruments is to release the HP3 self-hammering mole from within the instrument so that it will be able to drive itself into the ground. The whole process from landing to final deployment is expected to take two to three months.

For the science instruments to work – and for the mission to be a success – it’s critical that the instruments are safely deployed. So while sending a mission to another planet is a huge accomplishment and getting pictures of other worlds is inspiring, it’s important to remember that science is the driver behind these missions. As technologies advance, new techniques are discovered and new ideas are formulated. Opportunities arise to explore new worlds and revisit seemingly familiar worlds with new tools.

Using its science instruments, SEIS and HP3, plus the radio-science experiment (RISE) to study how much Mars wobbles as it orbits the Sun, InSight will help scientists look at Mars in a whole new way: from the inside.

SEIS will help scientists understand how tectonically active Mars is today by measuring the power and frequency of marsquakes, and it will also measure how often meteorites impact the surface of Mars.

HP3 and RISE will give scientists the information they need to determine the size of Mars’ core and whether it’s liquid or solid; the thickness and structure of the crust; the structure of the mantle and what it’s made of; and how warm the interior is and how much heat is still flowing through.

Answering these questions is important for understanding Mars, and on a grander scale, it is key to forming a better picture of the formation of our solar system, including Earth.