Three spacefarers from the United States, Russia and Japan gathered at the Johnson Space Center (JSC) in Houston, Texas, yesterday (Wednesday, 11 October), to discuss their upcoming voyage to the International Space Station (ISS). First-time NASA astronaut Scott Tingle was joined by fellow “rookie” Norishige Kanai of the Japan Aerospace Exploration Agency (JAXA) and veteran Russian cosmonaut Anton Shkaplerov. The trio will launch from the Baikonur Cosmodrome in Kazakhstan aboard Soyuz MS-07 on 17 December, kicking off a four-month mission. They will initially form the second half of Expedition 54, before rotating into the core of Expedition 55, under Shkaplerov’s command, through their return to Earth in early April 2018.

As a result of the Flight Readiness Review (FRR) held at Houston, U.S.A, on December 6, Japan Aerospace Exploration Agency (JAXA) and partner agencies of the International Space Station (ISS) project officially decided the launch date and time for the Soyuz spacecraft (53S/MS-07), which Astronaut Norishige Kanai will be onboard, as follows after confirming the safety and preparation status.
Astronaut Kanai will stay at the International Space Station for about four months as a crewmember of the Expedition 54/55, and will return to Earth in April on the Soyuz spacecraft (53S/MS-07).

On Sunday, Dec. 17, Scott Tingle of NASA, Anton Shkaplerov of Roscosmos and Norishige Kanai of the Japan Aerospace Exploration Agency will launch at 2:21 a.m. (1:21 p.m. Baikonur time) from the Baikonur Cosmodrome in Kazakhstan.

Coverage of Expedition 54 launch and docking activities is as follows:

NASA TV will air a full complement of video of the crew’s pre-launch activities in Baikonur in the days preceding launch.

The six crew members of Expedition 54 will continue work on the hundreds of experiments conducted off the Earth, for the Earth. This crew continues the long-term increase in U.S. crew size from three to four, allowing NASA to maximize time dedicated to research on the space station. 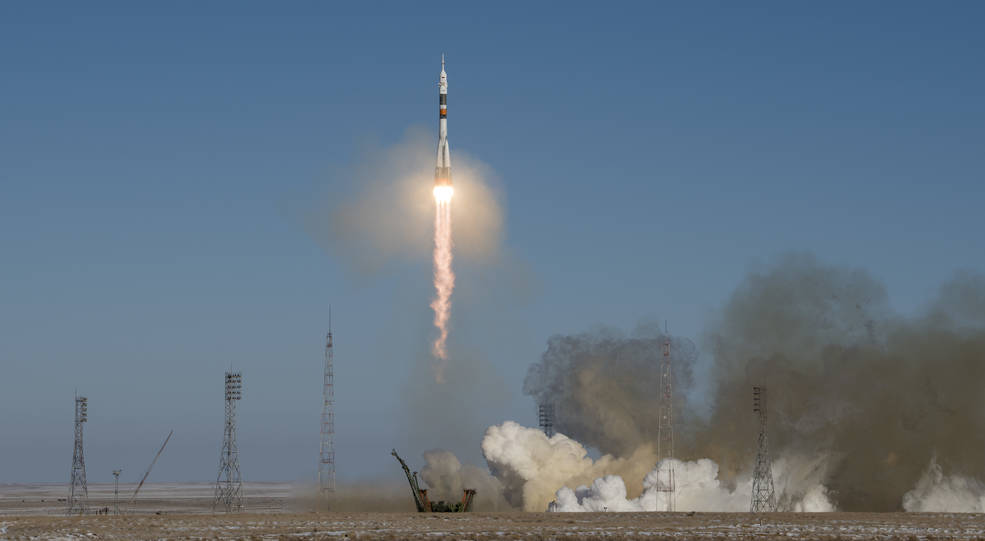 Three crew members representing the United States, Russia and Japan are on their way to the International Space Station after launching from the Baikonur Cosmodrome in Kazakhstan at 2:21 a.m. EST Sunday (1:21 p.m. Baikonur time).

The Soyuz spacecraft carrying NASA’s Scott Tingle, Anton Shkaplerov of the Russian space agency Roscosmos, and Norishige Kanai of the Japan Aerospace Exploration Agency is scheduled to dock to the space station’s Rassvet module at 3:43 a.m. Tuesday, Dec. 19. Coverage of docking will begin at 3 a.m. on NASA Television and the agency’s website, followed at 5 a.m. by coverage of the opening of hatches between the spacecraft and station.

The arrival of Tingle, Shkaplerov and Kanai will restore the station's crew complement to six. They will join Expedition 54 Commander Alexander Misurkin of Roscosmos and his crewmates, Mark Vande Hei and Joe Acaba of NASA. The crew members will spend more than four months conducting approximately 250 science investigations in fields such as biology, Earth science, human research, physical sciences and technology development.

This crew continues the long-term increase in crew size on the U.S. segment from three to four, allowing NASA to maximize time dedicated to research on the space station. Highlights of upcoming investigations include demonstrating the benefits of manufacturing fiber optic filaments in a microgravity environment, a new study looking at structures that are vital to the design of advanced optical materials and electronic devices and examining a drug compound and drug delivery system designed to combat muscular breakdown in space or during other prolonged periods of disuse, such as extended bed rest on Earth.

For more than 17 years, humans have lived and worked continuously aboard the station, advancing scientific knowledge and demonstrating new technologies, making research breakthroughs not possible on Earth that will enable long-duration human and robotic exploration into deep space. A global endeavor, more than 200 people from 18 countries have visited the unique microgravity laboratory that has hosted more than 2,100 research investigations from researchers in more than 95 countries.