InSight will do a deep dive into the Martian underground, pushing two instruments below the surface that will ferry information back from the depths.

W hat lies beneath the surface on Mars? NASA’s next Mars mission aims to find out. The InSight project, NASA’s first mission to study the Red Planet’s deep interior, is on track for a 2018 liftoff after needing to be delayed two years due to a technical issue. Scientists hope that it will help explain the formation of rocky planets, including our own.

InSight is expected to launch sometime in the five weeks following May 8, 2018, with a course charted for its arrival shortly after Thanksgiving. Lockheed Martin Space Systems has constructed the mission’s spacecraft — a stationary lander that will be positioned near the Martian equator — and is currently testing it at a facility near Denver.

“The lander is completed and instruments have been integrated onto it so that we can complete the final spacecraft testing including acoustics, instrument deployments and thermal balance tests,” Stu Spath, spacecraft program manager at Lockheed Martin, said in a statement.

While many missions have targeted Mars over the past two decades, the rovers, orbiters, and landers involved have all focused on the Red Planet’s surface, examining features such as craters, rocks, regolith (soil), and volcanoes.

Unlike any mission that preceded it, InSight will do a deep dive into the Martian underground, pushing two instruments approximately three to five meters (10 to 16 feet) below the surface that will ferry information back from the Martian depths.

The first is a seismometer whose development was led by the French space agency CNES in collaboration with several other countries, including the US. It is sensitive enough to detect ground movements that are only half the diameter of a hydrogen atom, and its main goal is to record “marsquakes” (seismic waves) or meteor impacts, which will help reveal information about the interior layers of Mars.

The second is a heat probe that can burrow at least three meters (10 feet) into the surface to measure how much energy comes from the planet’s interior.

The goal is to better learn how terrestrial planets such as Venus, Earth, and Mars were formed. Mars gives a special advantage to this kind of investigation because, unlike Earth, plate tectonics (which generate earthquakes, among other phenomena) don’t appear to be active on the planet.

“Because the interior of Mars has churned much less than Earth’s in the past three billion years, Mars likely preserves evidence about rocky planets’ infancy better than our home planet does,” said Bruce Banerdt, InSight principal investigator at NASA’s Jet Propulsion Laboratory in California.

The project’s third main experimental component will use radio transmissions between Mars and Earth to investigate changes in how Mars rotates on its axis. This could reveal information about the size of the Red Planet’s core.

When a mission to Mars gets delayed by more than a few weeks, it has to wait another 26 months to launch. That’s because the orbits of Earth and Mars bring the two planets into a favorable position to launch spacecraft – when the planets are relatively close to one another, which saves on spacecraft fuel and travel time – only for a few weeks every 26 months.

The InSight mission’s 26-month delay came in part due to orbital geometry as well as because of a technical issue. NASA called off the planned March 2016 launch after discovering a leak in a container surrounding the seismometer’s main sensors; the container was supposed to maintain a near-vacuum around these sensors. A new vacuum vessel was delivered in July and installed.

“We have fixed the problem we had two years ago, and we are eagerly preparing for launch,” said Tom Hoffman, InSight project manager at JPL. 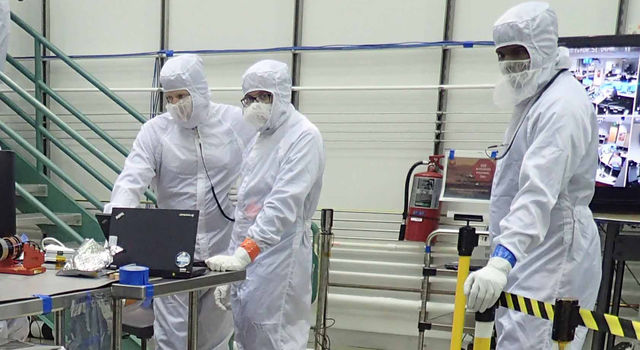 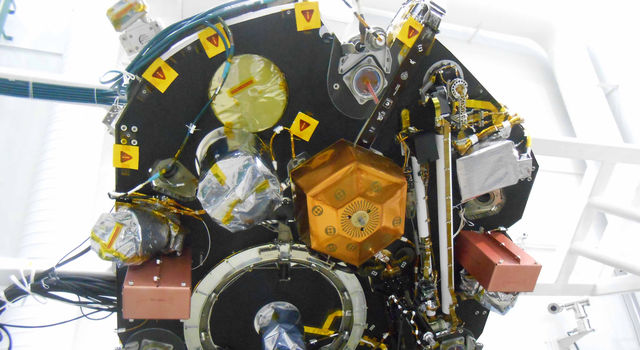 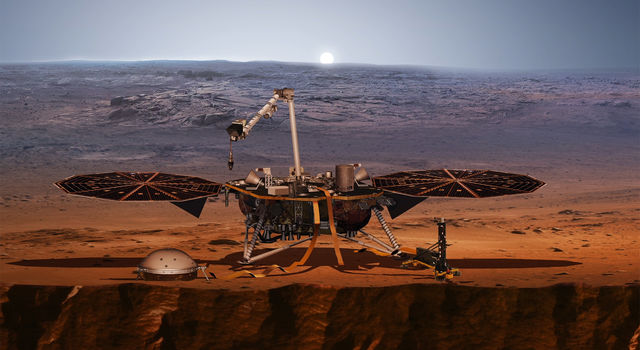 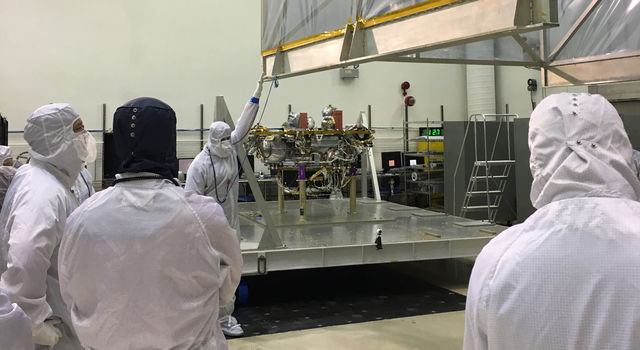 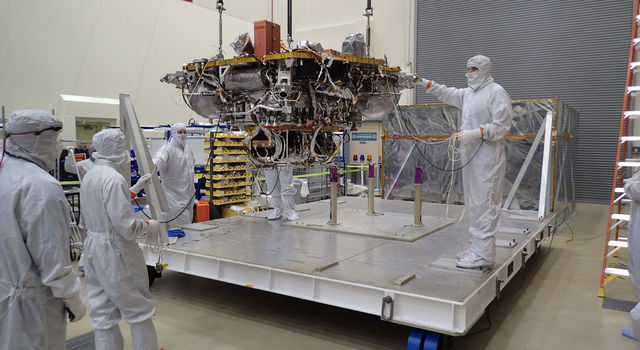 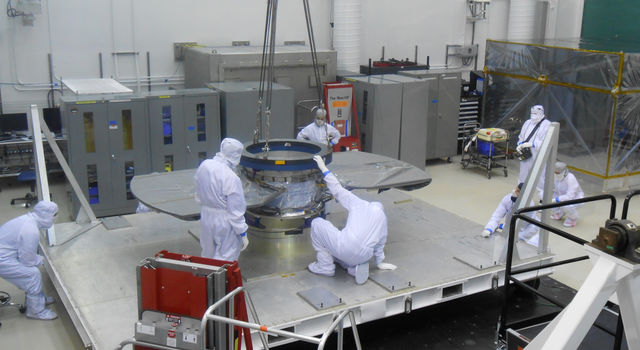 Preparation of NASA's next spacecraft to Mars, InSight, has ramped up this summer, on course for launch next May from Vandenberg Air Force Base in central California -- the first interplanetary launch in history from America's West Coast.

Lockheed Martin Space Systems is assembling and testing the InSight spacecraft in a clean room facility near Denver. "Our team resumed system-level integration and test activities last month," said Stu Spath, spacecraft program manager at Lockheed Martin. "The lander is completed and instruments have been integrated onto it so that we can complete the final spacecraft testing including acoustics, instrument deployments and thermal balance tests."

InSight is the first mission to focus on examining the deep interior of Mars. Information gathered will boost understanding of how all rocky planets formed, including Earth.

"Because the interior of Mars has churned much less than Earth's in the past three billion years, Mars likely preserves evidence about rocky planets' infancy better than our home planet does," said InSight Principal Investigator Bruce Banerdt of NASA's Jet Propulsion Laboratory, Pasadena, California. He leads the international team that proposed the mission and won NASA selection in a competition with 27 other proposals for missions throughout the solar system. The long form of InSight's name is Interior Exploration using Seismic Investigations, Geodesy and Heat Transport.

Whichever day the mission launches during a five-week period beginning May 5, 2018, navigators have charted the flight to reach Mars the Monday after Thanksgiving in 2018.

The mission will place a stationary lander near Mars' equator. With two solar panels that unfold like paper fans, the lander spans about 20 feet (6 meters). Within weeks after the landing -- always a dramatic challenge on Mars -- InSight will use a robotic arm to place its two main instruments directly and permanently onto the Martian ground, an unprecedented set of activities on Mars. These two instruments are:

-- A seismometer, supplied by France's space agency, CNES, with collaboration from the United States, the United Kingdom, Switzerland and Germany. Shielded from wind and with sensitivity fine enough to detect ground movements half the diameter of a hydrogen atom, it will record seismic waves from "marsquakes" or meteor impacts that reveal information about the planet's interior layers.

-- A heat probe, designed to hammer itself to a depth of 10 feet (3 meters) or more and measure the amount of energy coming from the planet's deep interior. The heat probe is supplied by the German Aerospace Center, DLR, with the self-hammering mechanism from Poland.

A third experiment will use radio transmissions between Mars and Earth to assess perturbations in how Mars rotates on its axis, which are clues about the size of the planet's core.

The spacecraft's science payload also is on track for next year's launch. The mission's launch was originally planned for March 2016, but was called off due to a leak into a metal container designed to maintain near-vacuum conditions around the seismometer's main sensors. A redesigned vacuum vessel for the instrument has been built and tested, then combined with the instrument's other components and tested again. The full seismometer instrument was delivered to the Lockheed Martin spacecraft assembly facility in Colorado in July and has been installed on the lander.

"We have fixed the problem we had two years ago, and we are eagerly preparing for launch," said InSight Project Manager Tom Hoffman, of JPL.

The best planetary geometry for launches to Mars occurs during opportunities about 26 months apart and lasting only a few weeks.

Together with two active NASA Mars rovers, three NASA Mars orbiters and a Mars rover being built for launch in 2020, InSight is part of a legacy of robotic exploration that is helping to lay the groundwork for sending humans to Mars in the 2030s.

More Than 2.4 Million Names Are Going to Mars

A spacecraft specialist in a clean room at Lockheed Martin Space Systems in Denver, where the InSight lander is being built, affixes a dime-size chip onto the lander deck in November 2015. This chip carries 826,923 names, submitted by the public online from all over the world over a 22-day period during August and September 2015.

Engineers at NASA's Jet Propulsion Laboratory, Pasadena, California, put the names onto this tiny 0.8 cm-square (8 mm-square) silicon wafer microchip using an electron beam to write extremely tiny letters with lines smaller than one one-thousandth the width of a human hair. The dime-size chip is affixed to the InSight lander deck and will remain on Mars forever.

Normally used to make high-precision nanometer-scale devices, this technique was also used to write millions of names that were transported on NASA Mars rovers and Orion’s first test flight.

InSight, for Interior Exploration using Seismic Investigations, Geodesy and Heat Transport, will launch from Vandenberg Air Force Base, California, in May 2018 and land on Mars Nov. 2018. This is the first Mars mission dedicated to study the deep interior of Mars. Its findings will advance understanding of the early history of all rocky planets, including Earth.

The InSight Project is managed by JPL, a division of the California Institute of Technology in Pasadena, for the NASA Science Mission Directorate, Washington. InSight is part of NASA's Discovery Program, which is managed by NASA's Marshall Space Flight Center in Huntsville, Alabama.

InSight project manager Tom Hoffman and principal investigator Bruce Banerdt pose with their "boarding passes" in 2015, showing that they're both sending their names to Mars. Image Credit: Lockheed Martin

Actor William Shatner recently shared his "boarding pass" for the InSight mission. NASA closed a second opportunity for members of the public to include their names onboard the InSight robotic lander. Image Credit: https://twitter.com/WilliamShatner

Last month, NASA invited members of the public to send their names to Mars. And the public responded loud and clear.

More than 1.6 million people signed up to have their names etched on a microchip that will be carried on NASA's upcoming InSight mission, which launches in May of 2018.

NASA's Jet Propulsion Laboratory in Pasadena, California, reopened the opportunity after it proved successful in 2015. During that open call, nearly 827,000 names were collected for a microchip that now sits on top of the robotic InSight lander.

The grand total once a second microchip is added in early 2018 will be 2,429,807 names. Space enthusiasts who signed up this last round shared their downloadable "boarding passes" on social media, complete with the total number of flight miles they've collected by participating in engagement initiatives for other Mars missions.

InSight will be the first mission to look deep beneath the Martian surface, studying the planet's interior by listening for marsquakes. These quakes travel through geologic material at different speeds and give scientists a glimpse of the composition and structure of the planet's inside. The insights into how Mars formed will help us better understand how other rocky planets are created.