SpaceX’s drone ship “Of Course I Still Love You” is undergoing repairs at Port Canaveral following the return of Falcon 9 booster B1031.2 after launching the SES-11 satellite. While the touchdown was nominal, a post-landing incident resulted in a short fire at the aft of the ship, which also damaged the robot that was to be used to secure the booster. The fire was quickly extinguished.

Highlighted by a SpaceX-produced blooper reel of failed landing attempts, the path to enabling Falcon 9 first stages to successfully return for a pinpoint landing on the deck of a drone ship in the ocean suffered some hard lessons in the early days of testing – including some “Rapid Unscheduled Disassembly (RUD)” events, as Elon Musk called them. 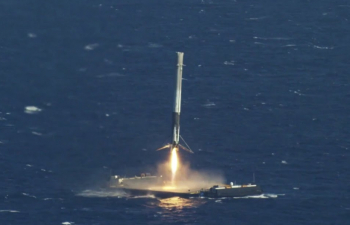 Although the refinements to the technology finally resulted in the boosters successfully making it back for a touchdown – first at LZ-1 at Cape Canaveral, soon followed by the first drone ship landing after launching the CRS-8 Dragon – it was noted that not every future landing attempt would be successful, especially when undertaking the more challenging drone ship return.

Amazingly, every landing attempt since – bar the Eutelsat 117 West B and ABS-2A dual payload launch in 2016 – has resulted in the booster making it back home intact, even landings that have pushed the limits of the boosters, such as the BulgariaSat-1 mission back in June.

“Falcon 9 will experience its highest ever reentry force… Good chance rocket booster doesn’t make it back,” tweeted Mr. Musk ahead of the launch.

Although video of the landing has never been released, the booster did make it back without suffering a RUD, but only after dancing on one landing leg, before finally spotting its landing on the drone ship’s deck – according to people who have seen the video.

“Rocket is extra toasty and hit the deck hard (used almost all of the emergency crush core), but otherwise good,” Mr. Musk tweeted after the landing.

All recent landings have been relatively smooth, including the latest, which involved the return of the booster that launches the SES-11 satellite from KSC’s 39A.

The return was the 18th successful landing of a Falcon 9 first stage, and the second landing for B1031.2. 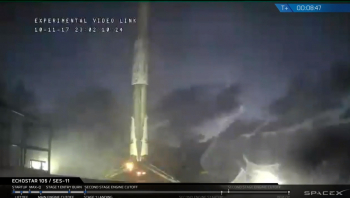 With the SpaceX webcast returning its focus to the primary mission of the second stage flight towards the eventual deployment of the satellite, post-landing procedures were taking place onboard the ASDS (Autonomous Spaceport Drone Ship).

The exact series of events is unclear, but it is understood the booster leaked some of its residue RP-1 fuel, which flowed along the deck of the ASDS and pooled near the containers at the aft of the drone ship.

The booster then continued post-landing operations, designed to safe the booster ahead of crews boarding the ship to complete the safing process ahead of the trip back to port.

At some point shortly after landing there was an ignition of the pooled RP-1, likely via the purging of the Triethylaluminum-Triethylborane (TEA-TEB) that is used as the first stage ignitor. This has to be purged as part of the safing procedures for allowing crew near the rocket. 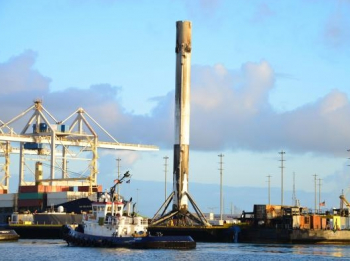 Fire hoses – staged on the deck of the ship – quickly doused the fire. However, the garage containing the robot – nicknamed “Roomba” or “OctaGrabber” (among other names) – was caught in the fire and damaged.

This was confirmed by the lack of the robot in view under the rocket during the ASDS’ return to Port.

Engineers instead secured the booster with jacks, which they have previously utilized before the robot was designed to secure the booster in place without the need of a human presence.

The robot also removes the need to weld hardware to the deck of the ship. (A “technical” overview of the robot’s operations was created by Abby Garrett). 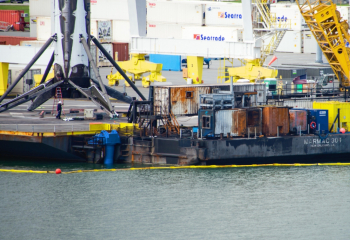 Photos of the ASDS “Of Course I Still Love You” back in Port Canaveral in L2 showed the extent of the fire damage to the aft of the ship.

No detailed report has been provided into how much damage has been caused, but it appears at least one generator required replacement.

At least one of the ASDS azimuth thrusters – hydraulic propulsion outdrive units with modular diesel-hydraulic-drive power units and a modular controller to provide drone ship stabilization while waiting for the booster to land – also appears to be out of configuration, possibly via a related loss of generator power. 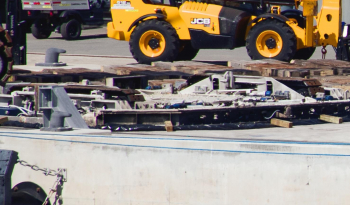 The OctaGrabber has also been spotted for the first time since OCISLY returned to Port Canaveral. It has been taken off the drone ship and is now on the dock to undergo repairs.

Only its base chassis and tracks are on view, although it is impossible to know how much damage has been suffered by the hydraulics and electronics. It is understood the goal is to repair this robot, meaning it should be salvageable.

However, while updated photos showed the drone ship from the weekend is already looking in far better shape than earlier in the week – with the damaged generator now replaced – it is unknown if the return of the robot will come in time for the next SpaceX launch, which is with the Koreasat 5A mission which is scheduled to take place at the end of the month.

This mission will involve OCISLY for the return of Falcon 9 booster B1042.