Detecting and predicting lightning just got a lot easier. The first images from a new instrument onboard NOAA’s GOES-16 satellite are giving NOAA National Weather Service forecasters richer information about lightning that will help them alert the public to dangerous weather. 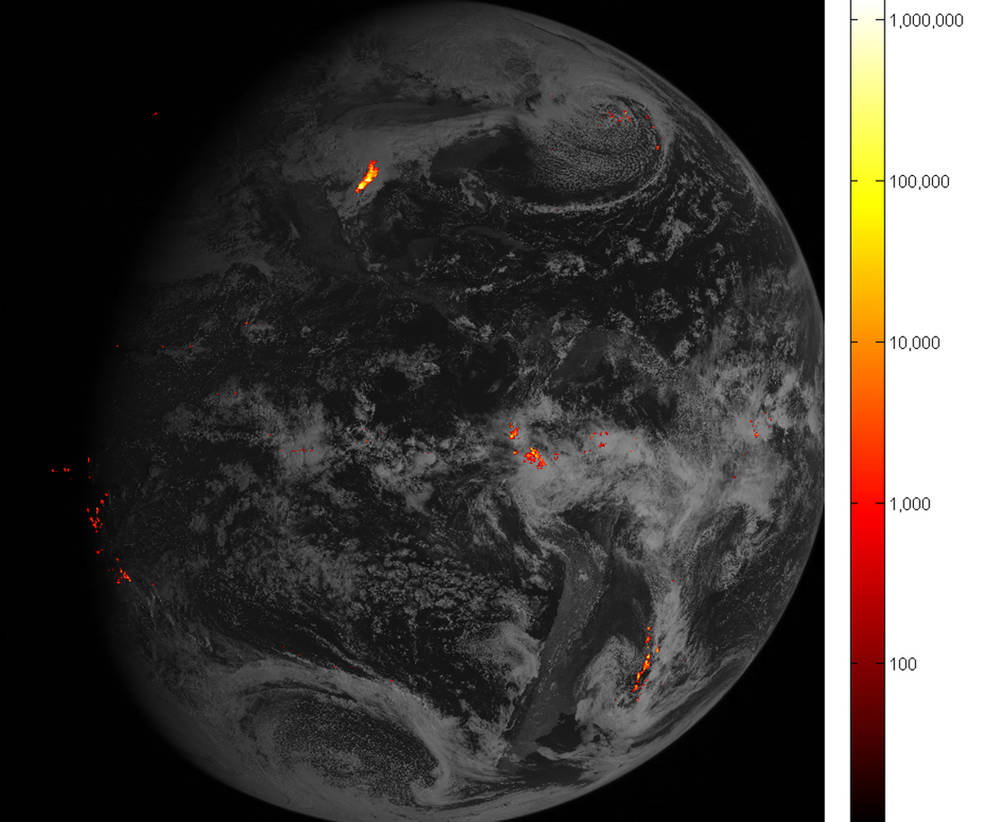 This is one hour of GOES-16's Geostationary Lightning Mapper (GLM) lightning data from Feb. 14, when GLM acquired 1.8 million images of the Earth. It is displayed over GOES-16 ABI full disk Band 2 imagery. Brighter colors indicate more lightning energy was recorded; color bar units are the calculated kilowatt-hours of total optical emissions from lightning. The brightest storm system is located over the Gulf Coast of Texas, the same storm system in the accompanying video. This is preliminary, non-operational data.
Credits: NOAA/NASA

The first lightning detector in a geostationary orbit, the Geostationary Lightning Mapper (GLM), is transmitting data never before available to forecasters. The mapper continually looks for lightning flashes in the Western Hemisphere, so forecasters know when a storm is forming, intensifying and becoming more dangerous. Rapid increases of lightning are a signal that a storm is strengthening quickly and could produce severe weather.

During heavy rain, GLM data will show when thunderstorms are stalled or if they are gathering strength. When combined with radar and other satellite data, GLM data may help forecasters anticipate severe weather and issue flood and flash flood warnings sooner. In dry areas, especially in the western United States, information from the instrument will help forecasters, and ultimately firefighters, identify areas prone to wildfires sparked by lightning.

GOES-16's Geostationary Lightning Mapper (GLM) shows lightning over southeast Texas on Feb. 14, 2017. GLM lightning data was overlaid on Advanced Baseline Imager (ABI) cloud imagery. Frequent lightning is occurring. Houston is indicated by the green cross and green dotted lines indicate the Texas coastline. This animation, rendered at 25 frames per second, simulates what your eye might see from above the clouds.
Credits: NOAA/NASA

Accurate tracking of lightning and thunderstorms over the oceans, too distant for land-based radar and sometimes difficult to see with satellites, will support safe navigation for aviators and mariners.

The new mapper also detects in-cloud lightning, which often occurs five to 10 minutes or more before potentially deadly cloud-to-ground strikes. This means more precious time for forecasters to alert those involved in outdoor activities of the developing threat.

NASA successfully launched GOES-R at 6:42 p.m. EST on November 19, 2016 from Cape Canaveral Air Force Station in Florida and it was renamed GOES-16 when it achieved orbit. GOES-16 is now observing the planet from an equatorial view approximately 22,300 miles above the surface of the Earth.