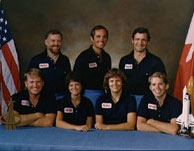 This was the first flight to include two women, Ride and Sullivan. Sullivan was the first American woman to walk in space. The Earth Radiation Budget Satellite (ERBS) was deployed less than nine hours into the flight. The Office of Space and Terrestrial Applications-3 (OSTA-3) carried three experiments in the payload bay. Components of Orbital Refueling System (ORS) were connected, demonstrating it is possible to refuel satellites in orbit. Other Payloads were: Large Format Camera (LFC); IMAX Camera, flying for the third time; a package of Canadian Experiments (CANEX); Auroral Photography Experiment (APE); Radiation Monitoring Equipment (RME); Thermoluminiscent Dosimeter (TLD); and eight Get Away Specials.

The crew assigned to the STS-41G mission included (seated left to right) Jon A. McBride, pilot; mission specialists Sally K. Ride, Kathryn D. Sullivan, and David C. Leestma. Standing in the rear, left to right, are payload specialists Paul D. Scully-Power and Marc Garneau with crew commander Robert L. Crippen in the middle. Launched aboard the Space Shuttle Challenger on October 5, 1984 at 7:03:00 am (EDT), the STS-41G mission marked the first flight to include two women. Sullivan was the first woman to walk in space. The crew deployed the Earth Radiation Budget Satellite (ERBS), connected the components of the Orbital Refueling System (ORS) which demonstrated the possibility of refueling satellites in orbit, and carried 3 experiments of the Office of Space Terrestrial Applications-3 (OSTA-3).

A Florida dawn scene on Oct. 5, 1984 forms the backdrop for the climbing Space Shuttle Challenger, its two solid rocket boosters and external fuel tank, launched on the eight-day STS-41G mission. The scene was photographed by astronaut Paul J. Weitz, who was piloting the Shuttle training aircraft (STA).

On this mission, Sullivan became the first U.S. woman to perform a spacewalk. Marc Garneau became the first Canadian astronaut to fly to space. The shuttle's crew of seven was the largest ever to fly on a single spacecraft at that time, and STS-41G was the first flight to include two female astronauts. STS-41G completed 132 orbits of the Earth in 197.5 hours, before landing at Kennedy Space Center, Florida, on Oct. 13.

In this image taken on Oct. 13, 1984 aboard Space Shuttle Challenger on mission STS-41G, astronauts Kathryn D. Sullivan, left, and Sally K. Ride show off what appears to be a "bag of worms", a product of their creativity. The "bag" is a sleep restraint and the majority of the "worms" are springs and clips used with the sleep restraint in its normal application. Clamps, a bungee cord and Velcro strips are other recognizable items in the creation.