When astronauts set foot on Mars, they may stay for months rather than days as they did during Apollo missions to the moon. The surface of Mars has extreme temperatures and the atmosphere does not provide adequate protection from high-energy radiation. These explorers will need shelters to effectively protect them from the harsh Martian environment and provide a safe place to call home.

For researchers at NASA’s Langley Research Center in Hampton, Virginia, the best building material for a new home on Mars may lie in an unexpected material: ice.

Starting with a proposed concept called “Mars Ice Dome,” a group of NASA experts and passionate designers and architects from industry and academia came together at Langley’s Engineering Design Studio. The project was competitively selected through the Space Technology Mission Directorate’s (STMD) Center Innovation Fund to encourage creativity and innovation within the NASA Centers in addressing technology needs. This is just one of many potential concepts for sustainable habitation on the Red Planet in support of the agency’s journey to Mars.

“After a day dedicated to identifying needs, goals and constraints we rapidly assessed many crazy, out of the box ideas and finally converged on the current Ice Home design, which provides a sound engineering solution,” said Langley senior systems engineer Kevin Vipavetz, facilitator for the design session. 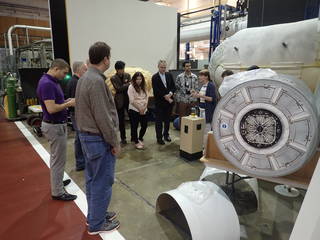 The team at Langley had assistance in their concept study, as a collaborative team from Space Exploration Architecture and the Clouds Architecture Office that produced a first-prize winning entry for the NASA Centennial Challenge for a 3D-printed habitat (Mars Ice House) played a key role in the design session.

The “Mars Ice Home” is a large inflatable torus, a shape similar to an inner tube, that is surrounded by a shell of water ice. The Mars Ice Home design has several advantages that make it an appealing concept. It is lightweight and can be transported and deployed with simple robotics, then filled with water before the crew arrives. It incorporates materials extracted from Mars, and because water in the Ice Home could potentially be converted to rocket fuel for the Mars Ascent Vehicle, the structure itself doubles as a storage tank that can be refilled for the next crew.

Another critical benefit is that water, a hydrogen-rich material, is an excellent shielding material for galactic cosmic rays – and many areas of Mars have abundant water ice just below the surface. Galactic cosmic rays are one of the biggest risks of long stays on Mars. This high-energy radiation can pass right through the skin, damaging cells or DNA along the way that can mean an increased risk for cancer later in life or, at its worst, acute radiation sickness.

Space radiation is also a significant challenge for those designing potential Mars outposts. For example, one approach would envision habitats buried underneath the Martian surface to provide radiation shielding. However, burying the habitats before the crews arrive would require heavy robotic equipment that would need to be transported from Earth.

The Ice Home concept balances the need to provide protection from radiation, without the drawbacks of an underground habitat. The design maximizes the thickness of ice above the crew quarters to reduce radiation exposure while also still allowing light to pass through ice and surrounding materials.

“All of the materials we’ve selected are translucent, so some outside daylight can pass through and make it feel like you’re in a home and not a cave,” Kempton said.

Selecting materials that would accomplish these goals was a challenge for materials experts.

“The materials that make up the Ice Home will have to withstand many years of use in the harsh Martian environment, including ultraviolet radiation, charged-particle radiation, possibly some atomic oxygen, perchlorates, as well as dust storms – although not as fierce as in the movie ‘The Martian’,” said Langley researcher Sheila Ann Thibeault.

In addition to identifying potential materials, a key constraint for the team was the amount of water that could be reasonably extracted from Mars. Experts who develop systems for extracting resources on Mars indicated that it would be possible to fill the habitat at a rate of one cubic meter, or 35.3 cubic feet, per day. This rate would allow the Ice Home design to be completely filled in 400 days. The design could be scaled up if water could be extracted at higher rates.

Additional design considerations include a large amount of flexible workspace so that crews would have a place to service robotic equipment indoors without the need to wear a pressure suit. To manage temperatures inside the Ice Home, a layer of carbon dioxide gas would be used as in insulation between the living space and the thick shielding layer of ice. And, like water, carbon dioxide is available on Mars.

It’s important, Kempton said, for astronauts to have something to look forward to when they arrive on the Red Planet.

“After months of travel in space, when you first arrive at Mars and your new home is ready for you to move in, it will be a great day,” he said.