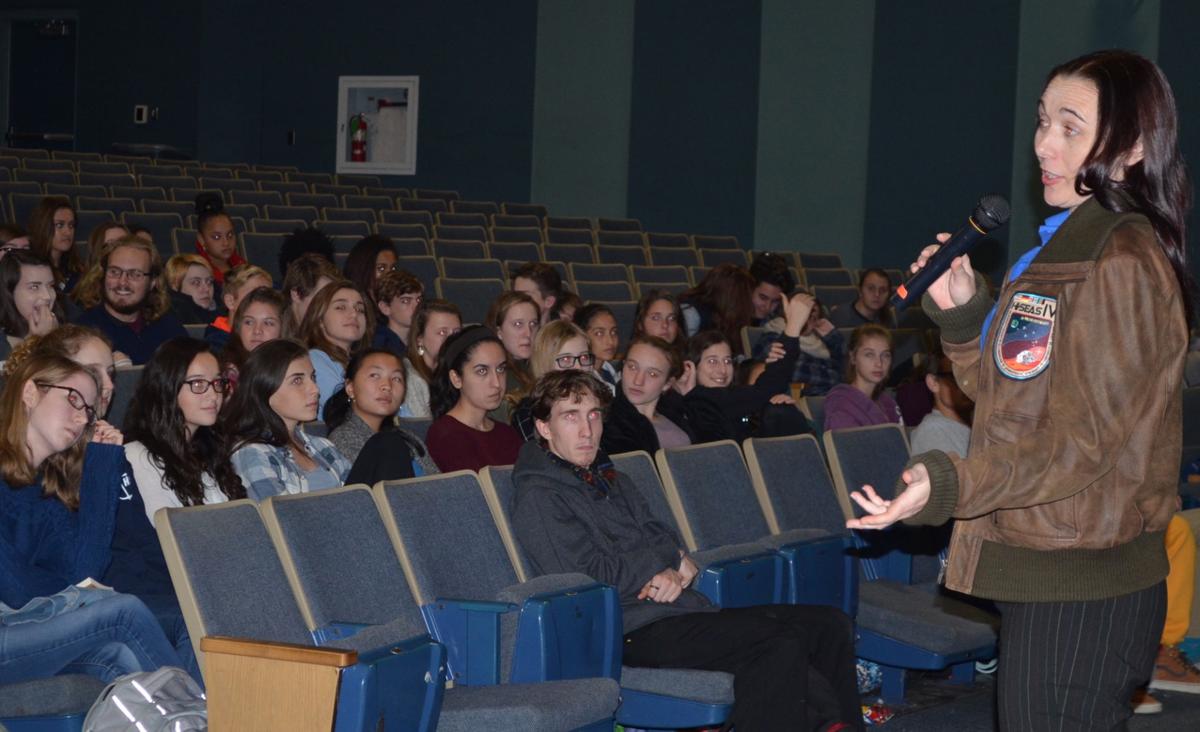 “These kids are the ones who are going to go [to Mars],” Gifford said, as students began to file into the auditorium. “This is 20 years off, they’re going to be the perfect age to go. And they’re going to support it or not with their tax dollars and their votes, so I just want to answer any questions they may have.”

The Mars Dome Project, as the mission was aptly dubbed, had Gifford and five others living in a two-story dome positioned 8,200 up on the side of Mauna Loa, a volcano in Hawaii. The dome was meant to simulate what it would be like to live on Mars, and was part of the University of Hawaii’s NASA-funded Hawaii Space Exploration Analogue and Simulation project.

“A flight simulator is how pilots train,” Gifford explained, “fire drills are how we all train to get out of buildings in an emergency, and simulations are how astronauts train to go to space. If you think about going to Mars, the first thought is, ‘how do you practice living on Mars?’ So, essentially this was a dry run for an actual Mars mission.”

The purpose of this simulation, Gifford added, was to learn to live off the grid, using solar power, growing their own food and learning “to not kill each other” for an entire year — the longest mission of its kind since a year-and-a-half long simulated Mars mission concluded in Russia five years ago.

“I thought this would be a really great opportunity for students to meet somebody who has gone through this experience,” said Brenda Dillmann, who teaches earth science, oceanography and astronomy at the high school. “Even if nobody’s interested in going to Mars, what they’ve learned from the Mars Dome Project is how to use resources wisely on Earth, which alone can have huge implications.”

For the entire year, the scientists could only exit the dome when dressed in full space-gear.

“The terrain was very rough and the suit was protective,” Gifford said. “It looked like Mars and although it wasn’t as cold as Mars, it was relatively remote, with no plants growing around, no animals, no people, no roads, no cars.”

While some nights in the uninsulated dome were chilly, Gifford added, they didn’t compare to the actual temperature of Mars.

“A warm, balmy day near the equator of Mars is like a cold winter day here, on Earth,” Gifford explained.

At its poles, she added, Mars can reach temperatures of -200 degrees Fahrenheit.

“So, it’s chilly,” she said, “but not so chilly that we couldn’t, with our modern technology, make that work.”

When the scientists finally left the dome, after embracing her husband, Gifford said she couldn’t help but marvel at every sensation that greeted her on Earth.

“We hadn’t felt any air on our skin in a year,” she said. “It was this wonderful, beautiful, soft sensation and the air smelled like my memory of the ocean — it was kind of salty — and it was really neat.”

Gifford, who currently works as a scientist-in-residence at the Saint Louis Science Center in Missouri, presented to around 140 students at the high school Wednesday. She showed off photographs and videoclips from her year in the dome, growing food, scaling the slopes of Mauna Loa wearing a spacesuit and conducting various experiments.

Gifford, who is originally from Rhode Island — she graduated from Moses Brown School in 1996 — has given several similar presentations since leaving the dome three months ago.

“It’s really interesting,” said Emily Kaczynski, a ninth grader at South Kingstown High School. “She’s a really interesting lady and it’s so cool that she was able to do this experiment and it’s even more amazing that we get to see her in our own school.”

Dillmann, who organized Gifford’s visit Wednesday, said she hopes the experience of hearing Gifford speak may have piqued students’ interest in space exploration and the technology that was developed as a result of space exploration.

“So much of what our technology is now has its origins in that,” Dillmann said.

“There are six people in the world who have lived for a year in a simulated Mars environment,” she continued, “Sheyna Gifford is one of them. We are honored to have had Ms. Gifford speak with students at South Kingstown High School.”