n this photograph taken on Sept. 1, 2016, the James Webb Space Telescope Pathfinder structure has been configured for the Thermal Pathfinder Test at NASA Johnson Space Center's giant thermal vacuum chamber, called Chamber A. The Pathfinder is a test version of the structure that supports the telescope. This is where end-to-end testing of the actual telescope will occur in 2017.

Among the mirror segments can be seen are one gold-coated flight-spare beryllium segment (just in front of the AOS), one uncoated beryllium engineering unit segment, and ten gold-coated aluminum thermal simulator segments.

The James Webb Space Telescope is the scientific successor to NASA's Hubble Space Telescope. It will be the most powerful space telescope ever built. Webb is an international project led by NASA with its partners, the European Space Agency and the Canadian Space Agency. 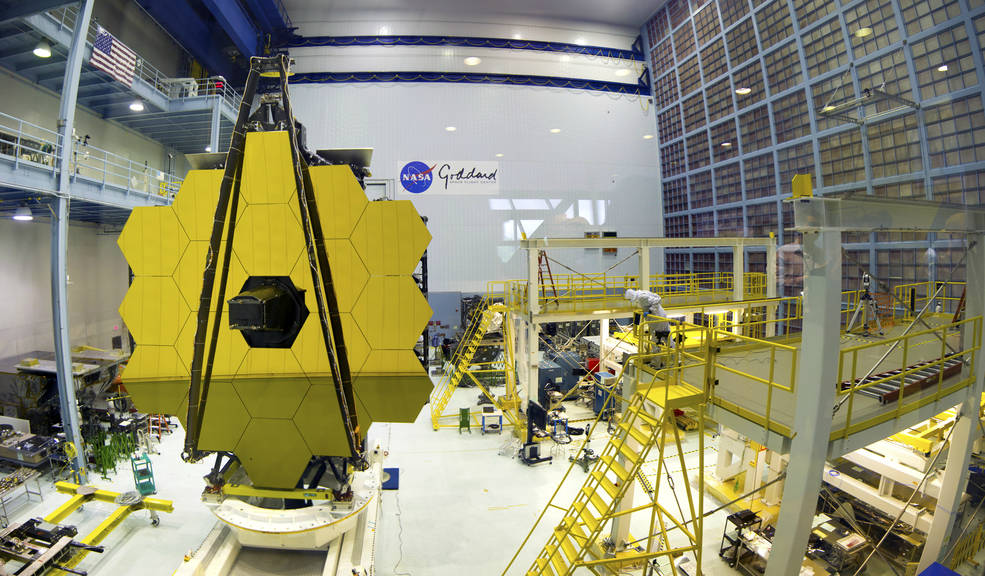 NASA's James Webb Space Telescope is the largest and most complex space observatory the agency has ever built. It will launch in 2018, and help us unravel the mysteries of the cosmos.
Credits: NASA/Francis Reddy

Media are invited to join NASA Administrator Charles Bolden Wednesday, Nov. 2, for an update about what’s in store for NASA’s next great observatory, the James Webb Space Telescope, and a rare glimpse of the telescope’s mirrors.

From 9 to 9:30 a.m., Bolden, along with other agency leaders and experts, will discuss the future of the world’s largest and most complex space telescope and its role in revealing the universe. This portion of the event, at NASA's Goddard Space Flight Center in Greenbelt, Maryland, will air live on NASA Television and stream on the agency’s website. After the discussion, media will have the opportunity to view the mirrors and interview Webb scientists and engineers until noon.

The Webb Telescope will study every phase in the history of our universe, from the first luminous glows of the Big Bang, to the formation of planetary systems capable of supporting life, to the evolution of our own solar system.