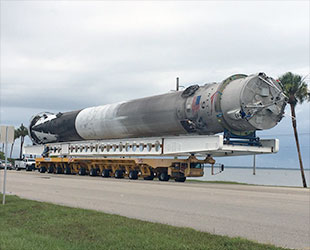 — SpaceX's new chariot for moving its rocket stages after they return to land is uniquely suited for the job, having been used to carry reusable space vehicles for close to 30 years.

The company on Wednesday (Aug. 24) delivered its latest launched and recovered Falcon 9 first stage from the port at Cape Canaveral to a hangar at NASA's Kennedy Space Center in Florida using a bright yellow, 76-wheel motorized vehicle. The specialized conveyor, which SpaceX acquired from NASA, was formerly employed to move space shuttle orbiters.

Previously referred to by NASA as the Orbiter Transporter System (OTS), the 106-foot-long (32 m) vehicle was last used in November 2012 to move the retired space shuttle Atlantis to its museum home at the Kennedy Space Center Visitor Complex. Described then as "the Ferrari of the OTS family," the transporter topped out the breakneck speed of 5 mph (8 km/h) when loaded with an orbiter.

Its maximum speed without carrying a shuttle was 13 mph (21 km/h), according to NASA. 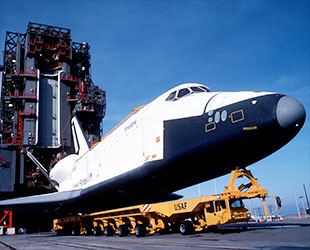 The OTS was originally built to transport space shuttles at Vandenberg Air Force Base in southern California. Used in tests with the prototype orbiter Enterprise in 1985, the west coast space shuttle launches were canceled in the wake of the 1986 Challenger accident.

Three years later, the OTS was moved to Kennedy Space Center in Florida, where it was used for the next 22 years to move the orbiters between their processing hangars and the Vehicle Assembly Building, where the winged vehicles were stacked with their solid rocket boosters and external tank before being rolled out to the launch pad.

With the end of the space shuttle program in July 2011, the OTS was deemed no longer necessary by NASA. In 2014, SpaceX purchased the vehicle at a federal surplus auction for $37,075. 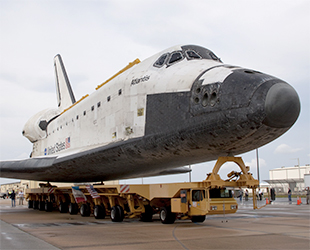 To use the former orbiter transporter to move its Falcon 9 rocket stages, SpaceX attached a large white metal mount to which the booster is secured. Prior to the OTS, SpaceX hired local contractors to move the landed stages using a multi-wheeled transporter that was towed by a truck.

The OTS is not the only shuttle-era hardware that SpaceX has put to new use. The company is also leasing NASA's Pad 39A, one of the space agency's former shuttle launch pads, where it plans to launch crews on Dragon spacecraft to the International Space Station and Falcon Heavy larger rockets beginning as soon as next year.

SpaceX also acquired two large antennas from NASA that were previously a part of the Merritt Island Launch Annex (MILA) used to track every space shuttle launch between 1981 and 2011. SpaceX intends to install the dishes at the site of its future commercial launch facility at Boca Chica beach in Brownsville, Texas, where they will track crewed missions to the space station.